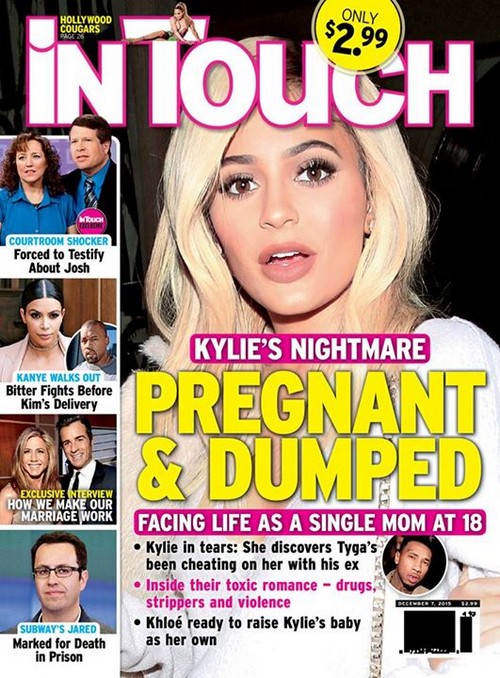 Kylie Jenner is pregnant according to a new report and her realtionship with Tyga is rocky, at best. The 18 year old reality TV star and much older rapper have been fighting like cats and dogs lately, just last week TMZ broke the news that Kylie and Tyga had broken up – although it was unclear whether it was over one of their alleged cheating scandals or something totally unrelated (like the fact that Kylie is sick of supporting her boyfriend financially).

A few days later, Kylie Jenner and Tyga got back together and all was well again. Kylie even was supposedly overheard at the American Music Awards saying that she was going to marry Tyga.

This week’s cover of In Touch Magazine features a photo of Kylie Jenner and Tyga, the headline screams “Kylie’s Nightmare: Pregnant And Dumped! Facing Life As A Single Mom At 18.” The cover goes on to tease that Kylie was devastated when she learned that “Tyga was cheating on her with his ex” (presumably Blac Chyna). But, there is good news for Kylie Jenner, apparently her big sister Khloe Kardashian has volunteered to raise the baby as her own!

We absolutely do believe that Kylie Jenner and Tyga broke up, just like In Touch Magazine’s cover reveals. The problem is, Kylie and Tyga’s relationship is so toxic and flaky that they got back together before the ink even dried on the cover.

No worries though, they will probably break up three more times before the month is over. As far as Tyga cheating with Blac Chyna – his baby-mama claims to have text messages proving that Tyga is still trying to get back together with her behind his 18 year old girlfriend Kylie’s back.

What do you guys think, is Kylie Jenner really pregnant? Do you think if she were pregnant, she would hand her baby over to her sister Khloe Kardashian who has had fertility woes? Let us know what you think in the comments below!