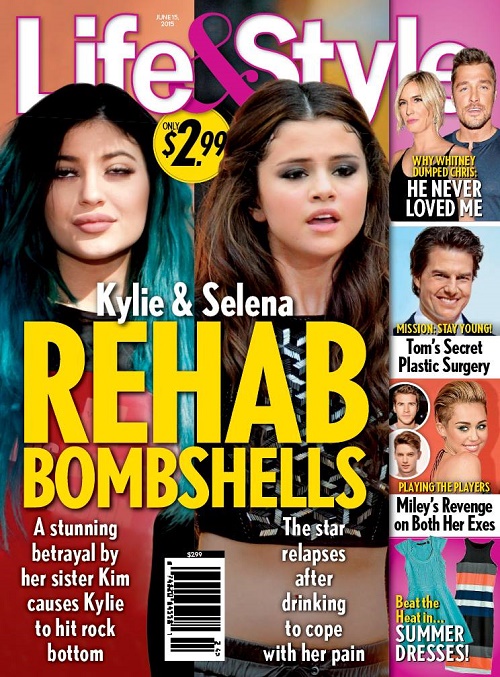 Is Kylie Jenner headed to rehab, and perhaps joining her big brother Robert Kardashian who is reportedly checked into a treatment center? Kylie Jenner allegedly has a serious drug problem, and her family and friends are trying to get the 17 year old into rehab. Ever since Kylie’s “I’m High As F—k” video got passed around SnapChat, there has been a microscope on the Keeping Up With The Kardashians star, and according to a new report her family wants to ship her off to rehab. And, this is our favorite part, Scott Disick wants to help her get sober!

This week’s cover of Life & Style Magazine reveals that both Kylie Jenner and Selena Gomez are on fast tracks to rehab. According to Life & Style Magazine’s inside sources Kylie has a serious cocaine problem. The tabloid’s source dished, “Kylie started drinking at about 14. Now that she’s doing Xanax and coke with her friends, she believes it’s not that big a deal. Kylie is a complete mess. Her boyfriend, Tyga, and her pal Justin Bieber are big weed smokers. But Molly, cocaine, Ecstasy, Vicodin and oxycodone are also popular with the group she hangs out with.”

Is Kylie Jenner going to rehab – well, we have no idea. Does she have a drug problem? That wouldn’t surprise us a bit, actually we would be shocked if she didn’t. When you’re dating a 25-year-old rapper and partying with Justin Bieber, the odds of you remaining sober are slim to none. Plus, Kylie has had a tough time handling the constant scrutiny of her relationship with Tyga, her family drama and dad’s transition to Caitlyn, on top of the body-shaming and bullying she has experienced on social media. And, let’s be real for a moment, can you blame anyone who has to live with Kris Jenner for popping a couple of Xanax’s?

So, do you think that Scott Disick and the Kardashians will be able to get Kylie Jenner checked in to rehab? Do you believe that she has a drug problem? Let us know what you think in the comments below!