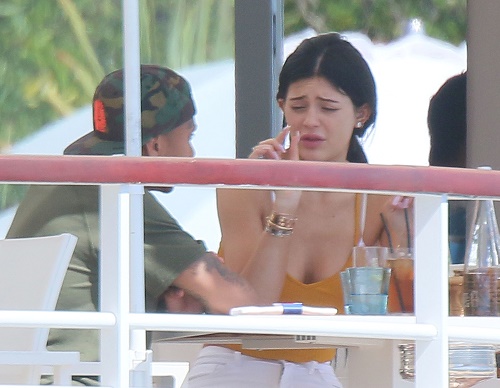 Tyga got a gun pulled on himself and 17-year-old girlfriend Kylie Jenner at a Swiss club in the wee hours of the morning on June 26! Apparently, Tyga has been spending too much time with the Kardashians and he has turned into a total diva. He showed up to the club where he was paid to do a performance an hour late – and then only performed for 10 minutes before he left with Kylie and proceeded to head to the parking lot and try to leave. And that did not go over well with the Swiss club owner, who had paid the rapper to play for an hour.

According to an exclusive report from TMZ, “Tyga left the club around 4 AM and got in his car with Kylie. The enraged owner was hot on Tyga’s heels, running out of the club, yelling for Tyga … a fight then broke out. At that point Tyga got out of the car to join in the fracas, but an eyewitness says someone in the owner’s posse flashed a gun.”

Being the hardcore gangsta that Tyga is, he reportedly hopped in his car and sped out of the parking lot with Kylie – leaving his bodyguards behind to defend themselves against the angry gun-wielding Swiss guy, who Tyga basically just robbed. They don’t play games in Switzerland. Apparently, if you get paid to sing for an hour, then you damn well better sing for an hour. Lesson learned. There were no injuries reported, and Tyga’s abandoned security guards seem to have made it out of the melee alive – no thanks to their esteemed employer.

It’s really not funny, you know Kylie Jenner could have been killed – and Kris Jenner would have lost SO much money if that happened. But, in all seriousness, Tyga is a punk…and his baby-mama Blac Chyna is more of a “G” than he is.