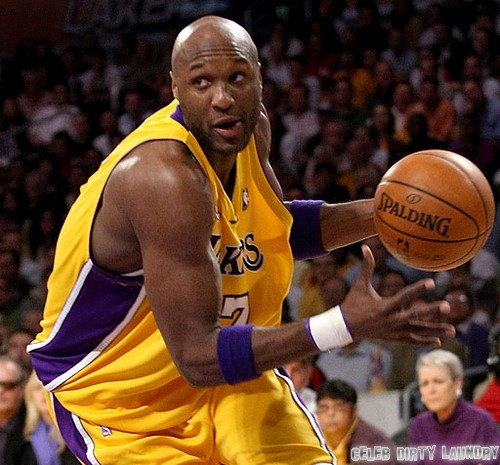 Lamar Odom is still lying in a hospital bed in Las Vegas after an apparent overdose at Love Ranch earlier this week. According to medical reports, Lamar had a combination of cocaine and herbal Viagra in his system – which is apparently a deadly combination. On Friday October 16 TMZ reported that Lamar has made some improvements, however the truth is that he is not awake and talking or smiling like some other false reports have claimed.

National Enquirer just released a shocking surveillance video from the Love Ranch in Las Vegas – it’s the last footage recorded of Lamar before he retired to his hotel room, where he was found later unconscious and lying on the floor, and not breathing.

In the grainy surveillance video Lamar can be seen sitting in outside at what appears to be a patio table, and a woman is also in the video with him. At one point it looks like Lamar is putting something in his mouth – National Enquirer’s sources at the Love Ranch claim that is the instant he took the pills that might have contributed to the overdose.

Lamar Odom’s prognosis was dim, but reports that he has made some small improvements. Apparently, his heart’s functioning is improving. And sources say that doctors are slowly trying to ween him off from the breathing machine to see if he is strong enough to breath on his own.

So, yes Lamar is making improvements. But, the reports floating around the Internet that are claiming that Lamar woke up and gave the doctors a “thumbs up” are far from true. If Lamar does pull through, the odds of him ever living a normal life again are slim to none.

Do you think that Lamar will be breathing on his own by the end of the weekend? Let us know what you think in the comments below!