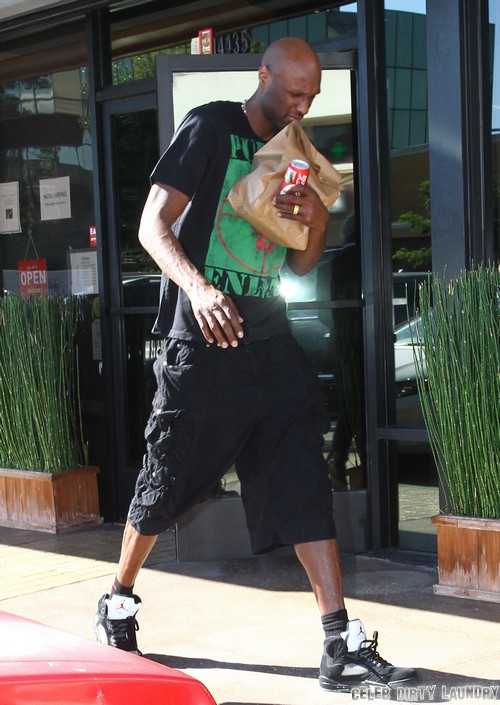 Is Lamar Odom checking in to rehab? Khloe Kardashian’s estranged husband has lost not one, but two of his best-friends to drug related deaths over the course of the last week – and the former NBA player is not taking it well. Lamar’s close friend Jamie Sangouthai passed away from a deadly skin infection he contracted through intravenous drug use, then a week later Jamie and Lamar’s close pal Bobby Heyward died from what is believed to be a drug overdose.

Lamar was already a hot mess after Jamie’s death, and for good reason, however considering his previous bouts with drug abuse and drinking – his grieving process is a recipe for disaster. Multiple sources reported that en route to Jamie’s funeral Lamar was spotted on a plane popping Xanax and drinking enough vodka to get a small village drunk. Lamar hasn’t resurfaced since Bobby’s death – but it’s safe to assume that he is hiding away somewhere and not in good shape at all.

Khloe Kardashian is stepping in and trying to save her husband before he meets the same fate as Bobby and Jamie, the Keeping Up With The Kardashians star is reportedly trying to get Lamar in to rehab before the drugs take his life as well. A source close to Khloe’s family dished to CDL, “All of Khloe’s family is trying to help her get Lamar into rehab. It’s not that they wish any ill will on Lamar, but they’re not exactly fans of him either. They’re doing it for Khloe, they know that if she loses Lamar to drugs too, she will never be the same. Even Kim, who has been trying to convince Khloe to divorce him for years, is helping her sister out with the intervention and finding a treatment center.”

Do you think that Lamar Odom’s two friends’ deaths will be enough to scare him sober? Or will he actually turn to harder drugs to numb the pain of his loss? Will Khloe and the Kardashians be able to get him in to rehab before it is too late? Let us know what you think in the comments below!