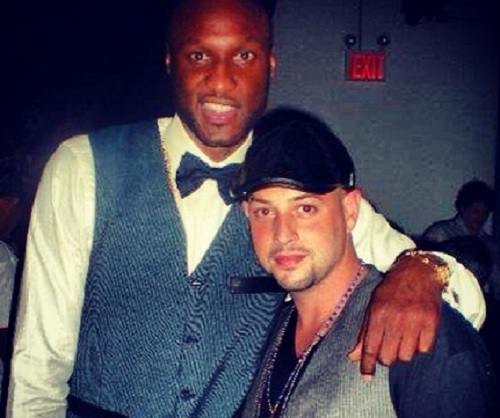 Lamar Odom’s best friend, Jamie Sangouthai, passed away on Sunday, June 14 in Los Angeles from an apparent heroin overdose. Jamie is best known for his appearances on Khloe Kardashian and Lamar Odom’s reality TV show, and the infamous video of Lamar rapping about Khloe after they separated also featured his pal Jamie in it. Khloe doesn’t appear to have any hard feelings though, and the Keeping Up With The Kardashians star tweeted, “When does it stop? RIP Jamie Sangouthai.”

According to TMZ, it is actually believed that Jamie Sangouthai was the person who originally “fueled Lamar’s 2 year crack binge.” And Khloe Kardashian has made it very clear in the past that she blames Jamie for getting Lamar Odom hooked on drugs. Ironically, when Jamie appeared on “Khloe & Lamar,” there was a storyline regarding his dangerous drug use and Khloe and Lamar were trying to convince him to get help for his addiction. Although the Kardashians are vague when it comes to Lamar Odom’s drug woes, and whether or not he is sober this week, Jamie’s death has everyone wondering if that means Lamar is addicted to heroin as well?

Recently, it was revealed that Khloe Kardashian is still very much in contact with her estranged husband, and on an episode of Keeping Up With The Kardashians her sister Kim caught her on the phone flirting with Lamar. Rumors have been popping up again teasing that Khloe and Lamar could be on the way to reconciling, and calling off their divorce for real this time. Jamie Sangouthai’s death could bring the couple closer together – after all, Lamar is going to need a shoulder to cry on. On the other hand, Jamie’s death could actually have the opposite effect on the couple, and Lamar could shut down and turn to drugs to cope, and create a bigger rift between himself and Khloe.

Do you think that Jamie’s death will bring Khloe and Lamar back together? Does this mean that Lamar is using heroin too? Let us know what you think in the comments below!