Khloe Kardashian Hotel Hookups With Lamar Odom: Divorce Called Off – Back Together For Months! (PHOTO) 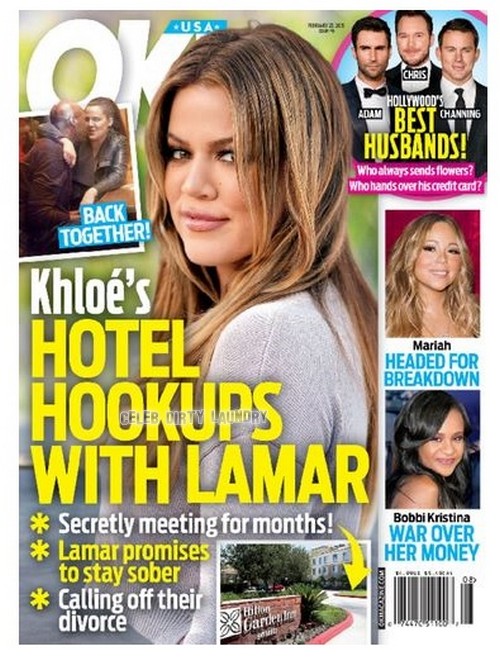 Khloe Kardashian and Lamar Odom are back together! Or so says the February 25th cover of OK! Magazine. Khloe Kardashian and Lamar Odom never finished their divorce proceedings, although Khloe insists that it is because Lamar won’t complete paperwork, no one is really buying that excuse two years later. With the money and legal team Khloe Kardashian has in her pocket – she could have been divorced by now if she really wanted to be. And, Khloe recently confessed to her mother Kris Jenner on “Kourtney & Khloe Take The Hamptons” that if it was up to her she would still be married to Lamar.

The February 25th cover of OK! Magazine teases, “Khloe’s Hotel Hook-Ups With Lamar: Secretly meeting for months, Lamar promises to stay sober, Calling off the divorce.” The cover also features a photo of Khloe and Lamar together captioned with, “Back Together!” When it comes to the Kardashian Family – nothing really surprises us anymore, and considering the fact that Khloe has been out of the limelight lately and hasn’t been spotted at a different club every night with a different rapper, there is a very good chance that the reports are true and she and Lamar are getting back together.

In other celebrity gossip news, the February 25th cover of OK! Magazine also teases a piece of Bobbi Kristina’s family and their escalating war over her money. The troubled daughter is currently on life support and has a $20 Million inheritance up for grabs if and when her family decides to remove her from life support. Considering what we know about the Houstons and Browns – there is no doubt in our minds that there will be an all-out knock down brawl over Bobbi’s cash.

This week’s edition of OK! Magazine also features a story on Mariah Carey, and claims the singer is “headed for another break-down.” Props to the tabloid for stating the obvious, the signs are all there – from codeine abuse, to embarrassing performances, and not to mention her current lawsuits and pending divorce, frankly we’re shocked Mariah hasn’t snapped already.

So, what do you think about Khloe and Lamar getting back together? Is it possibly the dumbest decision Khloe has ever made? Will Lamar really change his ways? Who do you think will win Bobbi Kristina’s inheritance? Does her “husband” Nick Gordon stand a chance? Let us know what you think in the comments below!