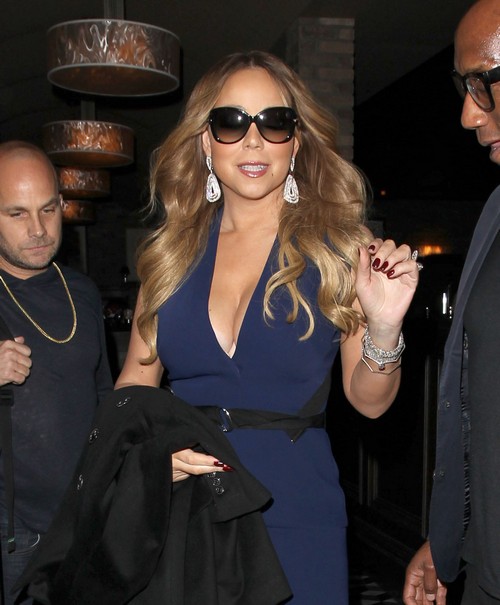 Mariah Carey is losing it, y’all. Rumors of Lip-syncing, addiction to sizzurp, the whole shebang. After her divorce from Nick Cannon, it’s starting to look as though Mariah Carey’s either stopped caring about her public image, or she’s just losing it completely. I mean, the Mariah Carey we knew in the past would NEVER let herself get caught lip-syncing, but that’s exactly what happened at the Jamaica Jazz and Blues festival.

Mariah was performing at the 2015 Jazz and Blues festival in Jamaica on Friday [a.k.a. she was desperate for cash and agreed to the performance], and based on all videos recorded from that night, Mariah screwed up – big time. She kept mouthing the words, even if they were the wrong words, and making emotional faces – even when it was glaringly obvious that her backing track was doing all the singing for her. I mean, kudos to her for putting on a big show, right?

It was so obvious that everyone knew that she was lip syncing, but she continued with it, not letting the boos and the confusion get her down. Many fans took to the Internet to comment on Mariah’s abysmal performance, with one such commentator writing, “A large number of persons in the crowd around me were very disappointed. Something about her was not right. She kept fixing her hair every 5 seconds, saying inappropriate things and her ‘singing’ quality was poor. There were persons shouting, ‘We want the real Mariah!’”

So what’s the reason for Mariah’s terrible singing, apart from her divorce? Well, rumor has it [via Star] that Mariah has been abusing sizzurp and cough syrup with codeine for the past few months. According to Star’s sources, Mariah has been handling the divorce from Nick Cannon terribly, and instead of trying to work through her issues, has taken to abusing sizzurp. Well, this is going to turn out well, isn’t it?

What do you guys think about Mariah Carey’s rumored sizzurp addiction and her lip-syncing debacle? Is she losing it? Let us know your thoughts in the comments below.