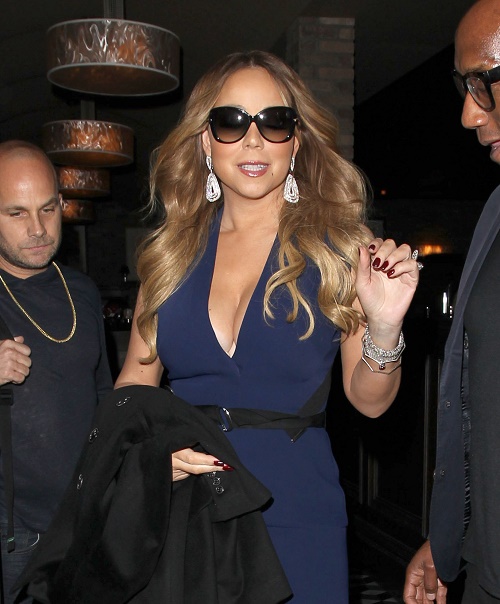 Mariah Carey is having a tough time dealing with her divorce from Nick Cannon, her soon to be ex-husband and the father of her twins Moroccan and Monroe. The couple’s break-up became official in December when Nick Cannon tried to quietly file divorce papers, and as if a divorce wasn’t bad enough – Mariah’s second worst nightmare came true. She began losing her voice! Mariah Carey’s shaking rendition of “All I Want For Christmas Is You” at Rockefeller Center in December made it painstakingly clear that the rumors are true and the diva’s vocals are in serious trouble. Rumors have that all this divorce relates stress is driving the diva towards drugs, drink  and an emotional breakdown!

The February 9th edition of Star Magazine reveals that after her disastrous performance at the Christmas Tree lighting ceremony, “Mariah consulted throat experts who recommended total voice rest. The problem: Mariah is a chatty diva who just couldn’t refrain from talking to her kids or ordering her staff around, so her voice got worse and she begged doctors for a syrup script. Mariah’s team was adamantly against it and we worried that she would develop a problem.”

Considering Mariah Carey’s poor willpower when it comes to binge-eating and binge-drinking, it is no wonder her staff tried to shoot down the idea. Who to have to work for a hungry drunk diva – with an addiction to codeine? Unfortunately, Mariah ignored the warnings and got a prescription for codeine cough syrup to help heal her damaged vocal chords, and then another prescription, and then another…it’s suffice to say Mariah is officially hooked on syrup.

According to Star Magazine, “Mariah’s friends and family are concerned that the cough syrup, compounded with work pressures and alcohol could harm her.” America is basically just holding their breath and waiting for Mariah Carey to completely crash and have another epic meltdown, and a codeine addiction sadly means she is one step closer to said meltdown. What do you think? Will the divorce process, custody battle over her twins, and her grueling work schedule take a toll on Mariah Carey? Do you believe that she is really pounding codeine and champagne every day? Let us know what you think in the comments below!