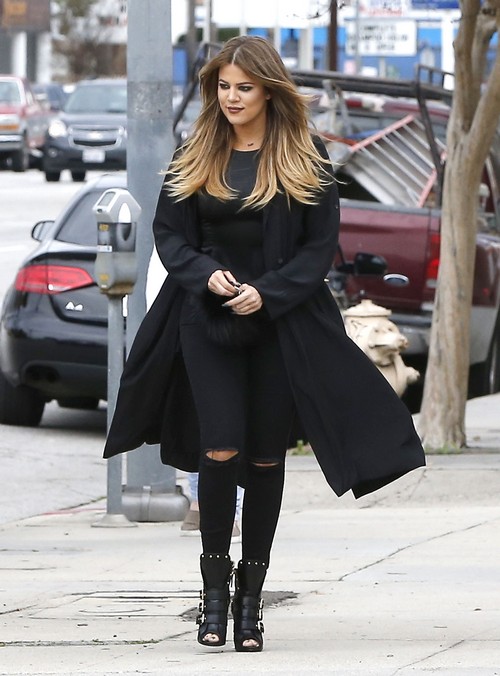 It’s not enough for Khloe Kardashian that she has reality shows on E!, she’s now reportedly trying to land a regular hosting gig. I guess Khloe’s forgetting the disastrous stint that she had on X Factor, which was a national joke more than an actual job. In fact, she did such an atrocious job on the show that it probably hindered her efforts to land a solo hosting gig, but perhaps she thinks that enough time has passed since then that she can now give it another try.

A source tells Naughty Gossip, “She thinks she has the talent for a long run show, and wants to prove that. The problem is that no one will listen to her at E. They know better than to give her a job like that; it’s best she sticks to part-time hosting duties.”

Imagine – she’s so terrible at hosting gigs that even E! – her alma mater and her claim to fame – refuses to give her a job. And really, it’s probably Khloe’s jealousy that has prompted this renewed desire to land a hosting gig. Kim Kardashian’s fame is increasing every day, thanks to her husband, Kanye West, and her famewhore antics. Kourtney is busy dealing with her alcoholic husband and trying to wrangle her three children. Kendall Jenner and Kylie Jenner are becoming staples in the tabloid world, thanks to Kendall’s modeling career and Kylie’s ever changing hairstyles and fashion.

At the end of the day, Khloe Kardashian is actually the only member of the Kardashian family not receiving regular media coverage. Last year, she had her relationship with French Montana and her divorce from Lamar Odom that kept her in the media, but she doesn’t even have that anymore. At this point, she probably feels that a reality TV hosting gig is the only thing that will get her back in the media spotlight.

What do you guys think about Khloe Kardashian’s attempts to land a solo hosting gig on E! Let us know your thoughts in the comments below.