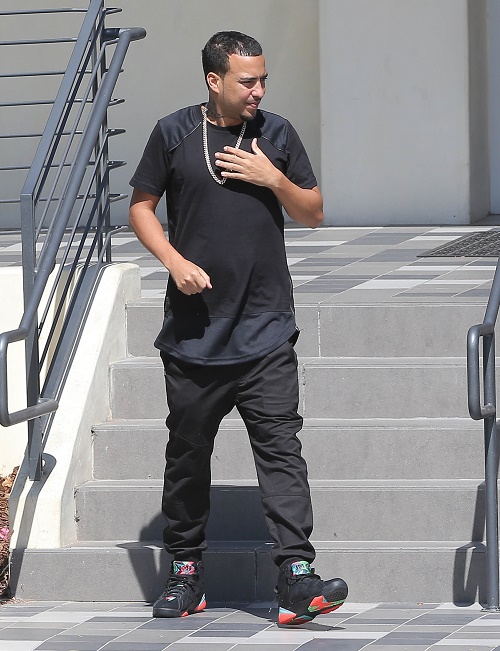 French Montana is Khloe Kardashian’s boyfriend – if you ask him. The rapper is currently promoting his new album, “Casino Life 2: Brown Bad Legend,” and is using his relationship with Khloe Kardashian to do so. Shocker. Since Khloe began dating or hooking up with the rapper, their relationship status varies on which one of them you ask. He has been accused of using her celebrity status to boost his career, and it looks like there was definitely some truth to the allegations.

French Montana recently sat down with People Magazine to discuss his new album, and let’s be real, People Magazine could care less about his album and never would have given him the time of day if he wasn’t linked to Khloe Kardashian. In the interview with French, his relationship with Khloe obviously came up.

People Magazine asked Montana, “Your girlfriend Khloé Kardashian starred in the music video for “Don’t Panic.” Do you have plans to feature her in more, and does she get a sneak peek at your music?” Instead of denying that Khloe was his girlfriend French replied, “Not for now, but I definitely let her see [my music] when I’m around. It’s always positive feedback. I like to keep my private life private because that works with my sanity, but she’s a good, beautiful person.”

Khloe’s close pals and family have warned her about her relationship with French Montana since day one. When they first began dating and he was appearing on the family’s reality TV show, it became clear that he was using Khloe to promote his music. According to our insiders close to the Kardashian family, Khloe’s sister, Kim, hates French and has been pressuring Khloe to dump him once and for all – because it is obvious that he is using her.

The source explained, “Khloe’s not dumb, she knows that French is dropping her name left and right to promote his album. But, she is still in a weird funk over Lamar Odom – and French always seems to show up at the right time and tell Khloe exactly what she needs to hear to boost her confidence. She’s really vulnerable right now, and French has her wrapped around his finger.”

Do you think that French Montana would be half as successful as he is now if he had never starred on Keeping Up With The Kardashians and dated Khloe? Do you think that he is intentionally implying that they are together in interviews to sell his records, or does he really care about Khloe? Let us know what you think in the comments below!