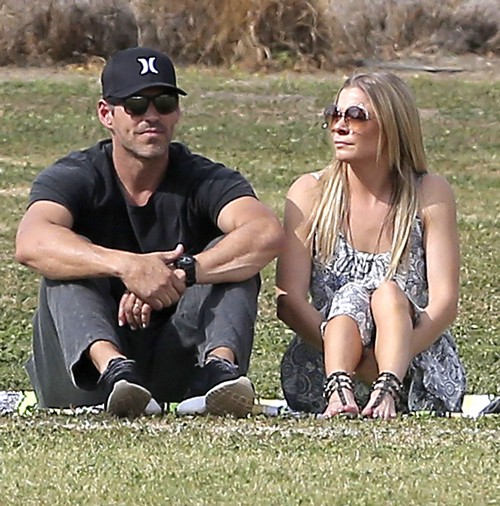 LeAnn Rimes took advantage of Brandi Glanville’s son for another photo op with the man she supports, Eddie Cibrian. After leaving Eddie Cibrian to share every conscious moment of her trip to London via social media networks, LeAnn Rimes has returned to American. I would apologize to the United Kingdom, but I was really hoping they’d keep her.

LeAnn Rimes took a break from trying to ‘Single White Female’ her way through Hollywood – stealing the identities and styles of everyone from Monica Potter to Taylor Swift – to detail every salad and piece of sushi she ate while abroad. She also took measures to ensure that she wouldn’t come home to find Eddie Cibrian face down in the lap of a night club hostess. According to Star magazine, Rimes used their home security cameras to keep an eye on Cibrian. The mag reported, “LeAnn can see what cars come in and out, as well as what cars drive past on the street out front, and if she wants to check it Eddie’s car is in the driveway, she can.” Basically, if Eddie exited the house, LeAnn would be able to watch him do his happy dance on the way to his car before driving off to console his lonely crotch with a waitress he met at IHOP.

Once she returned home, Rimes took a break from posting pics of what bikini she was going to slip over her Tupperware boobies, and posted a slew of inspirational clichés. Among the chalkboard messages conveying how very deep she is (kiddie pool levels come to mind), LeAnn shared photos of Eddie Cibrian and his son, Jake to nab some positive attention. LeAnn Rimes took her stepson’s soccer game and turned it into a photo-op while wearing a pair of sunglasses that made her look about 80-years-old. I want to get the chic style here, but on Rimes, the shades look like a device fashioned from two beer bottles used to look into the future.

Perhaps she is trying to see if Brandi Glanville will be fired from ‘Real Housewives of Beverly Hills.’ No worries LeAnn, nothing has changed. Brandi is still on television and Rimes is not. After one season and eight episodes, LeAnn Rimes and Eddie Cibrian’s reality show, LeAnn & Eddie, was cancelled. Rimes’ life is filled with drama that keeps her relevant, but her show was as interesting as documentary on boiled broccoli. Instead of seeing Rimes cry, accuse Eddie of cheating, drink all the vodka, and pass out in a pile of high-waist jean shorts drunkenly mumbling, “You can’t cheat on me. I’m LeAnn Rimes. I’m country’s unicorn sweetheart. I sang ‘Blue’ dammit!”

The show was billed as Rimes and Cibrian’s “opportunity” to show people that LeAnn isn’t a homewrecker and Eddie isn’t a slut for blonde morons. Instead, fans got a peek of Rimes rearranging furniture and her dogs looking apologetically at the camera, toying with the idea of pooping on the carpet to liven things up a bit.

I’m sure Brandi Glanville will have something to say about Rimes’ desperate attempt for attention. The two usually have Twitter fights over anything involving Brandi and Eddie’s kids. Maybe Glanville is as bored with LeAnn Rimes’ staged photo-ops as the public is? What will LeAnn do if she can no longer spur her husband’s ex-wife into social media fights like a couple of middle school girls? Maybe she can just go back to pissing people off by making tasteless rape jokes.