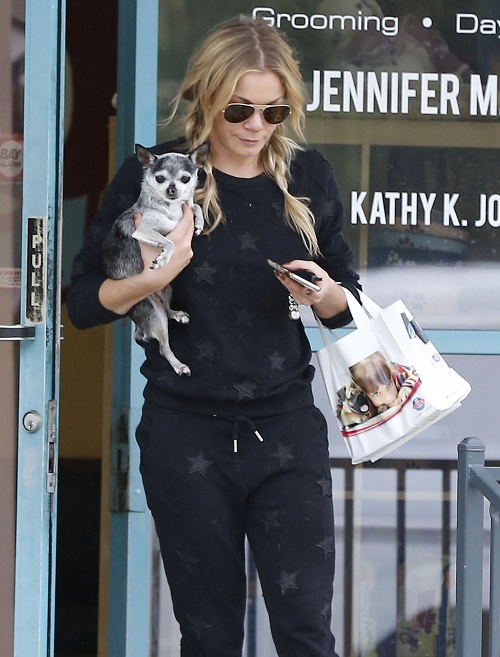 Just when you thought the crazy that is LeAnn Rimes and Eddie Cibrian couldn’t get any crazier, Rimes always manages to top herself. In case you didn’t know, Leanne likes to copy the persona’s of other women. The slang acronym for her obsessive behavior is SWF, taken from the cult film, “Single White Female”.

In the past, the public has watched Leann attempt to morph into Piper Parabo, Brandi Glanville, and now, actress Monica Potter. LeAnn’s unique brand of stalking is rare in that she doesn’t attempt to hide it. She literally publicizes her morphing into other people.

When Rime’s filmed a cameo at the end of the film, “Coyote Ugly”, she met the star of the film, actress Piper Parabo. The fact that LeAnn’s longtime boyfriend at the time, Andrew Keegan, ditched Rimes for Parabo after filming might have been the catalyst for LeAnn’s sudden desire to emulate all things Piper. If you haven’t seen this yet, check out this photo of Parabo and Rimes.

Rimes doesn’t emulate; she copies, as in carbon copies other women. Mannerisms, exact accessories, hair, clothing, cars, neighborhoods, jewelry, hobbies, and lives, if she can.

In the case of model Brandi Glanville, LeAnn copied her entire life. While Brandi Glanville, when she was still Mrs. Brandi Cibrian and Rimes was still Mrs. Dean Sheremet, Rimes moved around the corner from the Cibrians. This was all while Rimes was seemingly living with her then husband, Sheremet, in Nashville. She then proceeded to copy Brandi Glanville’s hairstyles, hair color, purses, shoes, clothing, jewelry and the make and color of her SUV. To this end, Rimes even visited Glanville’s’ dentist, hairdresser, plastic surgeon, and many of her other beauty service providers. She completed her ensemble by “borrowing” Glanville’s husband and children to complete the look. After attempting to copy every detail of Glanville’s life and look, she hired Glanville wedding dress designer and longtime friend Reem Acra to make her wedding dress. The sunset beach wedding planned by Rimes eerily copied the wedding of Cibrian and Glanville.

This SWF continues to this day, six years later. Rimes appeared at Glanville’s children’s first soccer game of 2015, dressed as…Glanville. It was so confusing; Glanville fans did double takes when they saw the recent Daily Mail photos of Rimes with Glanville’s ex-husband and children. If not for the nose and short legs, it was hard to distinguish whether it was Glanville or Rimes with the Glanville-Cibrian children.

The reason why any woman would want to so publicly emulate another to such an extent is both perplexing and disturbing to the many who follow such things. The internet has created small subgroups that check Rimes’ social media and press daily to ogle her latest SWF presentations. A favorite of Rimes is posting or Tweeting an identical Tweet to that of Cibrian’s ex-wife, Brandi Glanville.

Rimes will mimic the message, hashtag, and often adds a similar photo to whatever Glanville posts. Many such as Twitter’s @SidePiece33 document the shenanigans and are quite humorous. Others are as disturbing as Rimes herself. It’s difficult to tell who is stalking who – Rimes or the some of the more obsessed people who watch Rimes. The happenings can be dizzying and were too much for this writer to decipher. One thing is certain: Rimes does indeed put on a show, and she knows she not only has an audience but that the audience is also watching.

Recent discoveries have unearthed a new Rimes obsession with actress Monica Potter and singer Taylor Swift. A discovery worthy of Sherlock Holmes. The Rimes watchers are doggedly good at what they do, and credit should be given where it is due. However, it’s a discovery that is equal parts disturbing, comical, and at the same time very sad. Rimes has found a new obsession in actress, Monica Potter. Potter is the pretty blonde actress who starred in “Along Came a Spider” with actor Morgan Freeman and in the Nicholas Cage vehicle, “Con Air”. Potter is now married and owns a home goods store in Ohio. She’s a crafting, mother of two living far off the Hollywood grid. So, how did Potter land on Rimes SWF radar?

Potter is set to star in a new network sitcom with Rimes’ husband, actor Eddie Cibrian. After six years, Rimes suddenly began posting photos of hairstyles, clothing, and images that didn’t mimic Glanville. This break in behavioral pattern set the Rimes hobbyists in hot pursuit. They quickly unearthed a home goods, crafting, and lifestyle website run by Monica Potter. On that site, Potter had posted photos of herself in certain poses, hairstyles, clothing, and domestic photos aligned with her lifestyle store and site. Rimes was now apparently copying Potter down to her plaits.

One of the more fun catches was of Potter’s Valentine’s Day chalkboard message. Potter writes dainty chalk messages and inspirational quotes to her family, husband, and fans. There was a special chalkboard message on Valentines Day. Instantly, LeAnn began mimicking not only the practice, but also some of the messages themselves, including the Valentine’s message that gave her away. Now, Rimes is traveling with a chalkboard and posting messages daily from London. Many also seem far too similar to singer Taylor Swift’s own chalkboard messages. Rimes also blatantly copied the idea Swift’s 1989 album cover logo, instead naming her own shirts 1982. The shirts and accompanying photos use a similar style and filter as used by Swift. Rimes has no new album, as she has no label.

Over a month of this SWF nonsense has been cataloged and mused over. It has been said that a handwriting comparison shows the chalk love notes attributed to Eddie Cibrian are in Rimes own handwriting, not Cibrian’s. This handwriting analysis led to another disturbing possibility. Is Rimes now writing herself love notes on Monica Potter’s chalkboard while wearing Glanville’s clothes and dancing like Taylor Swift? It’s anyone’s guess. Who knows what the Rimes hobbyists will discover next? One thing remains certain: to most people, from any angle, it started looking crazy a long time ago.

@jersey_5 @leannrimes he didn't write it, she did. she needs to forge his style better to make it believable. #blotus pic.twitter.com/swNmuhyUKe