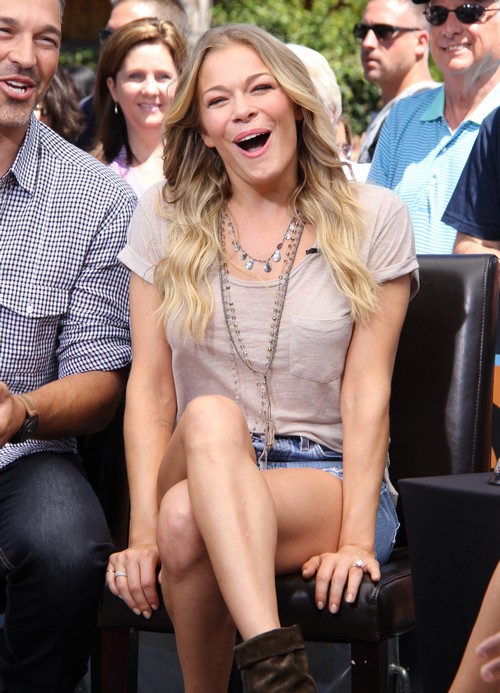 LeAnn Rimes is clinging to the last vestiges of her marriage to Eddie Cibrian, even though she has to be delusional at this point if she thinks their relationship is going to escape divorce and last much longer. Sure, they made it this far because they both had a common goal – land a reality show, and then make that reality show work. Well, they landed the show, but it was so atrocious that making it work was a failed effort.

But with that being said, LeAnn Rimes doesn’t give up so easily. According to a new report from Star Magazine, LeAnn has taken to faking her illnesses and cancelling concerts, all in an effort to make Eddie Cibrian rush home and spend more time with her. Well, the joke’s on her – he doesn’t seem to care very much….

Star’s source explains, “She figures that if she watched over Eddie’s every move and spends every waking moment with him, there’ll be no way for him to have an affair. Her fans may hate her for it, but she couldn’t care less.”

Yeah, I can see LeAnn Rimes literally not caring about her fans anymore, not when her future with Eddie is at stake. She might pretend as though her fans mean the world to her, but her actions say otherwise. Sure, she tweets them and apologizes for being ‘sick’, but then writes about how she’s drinking margaritas four hours later. The least she could do is get her stories straight, no? If you’re going to cancel a concert because of being ‘sick’, then have the wherewithal to actually pretend to be sick, not party and then upload pictures from said party the next day.

What do you guys think? Will LeAnn Rimes’ very transparent ploy to keep Eddie Cibrian actually work, or will it just hasten the inevitable divorce? Let us know your thoughts in the comments below.