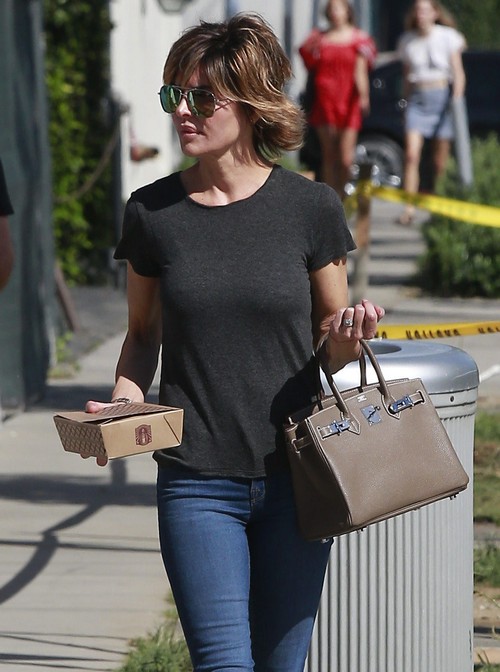 RHOBH Season 5 spoilers reveal Lisa Rinna and Kyle Richards for what they are and Brandi Glanville above it all. The long awaited finale of RHOBH airs Tuesday night, March 24, on Bravo. What can fans expect? Sources say the finale centers around a soiree hosted by Adrienne Maloof. But, Maloof only provides the window dressing in which the Housewives gather for the send off to Season 5 of The Real Housewives of Beverly Hills franchise. What we do know is that after the finale airs, Brandi Glanville turned down the coveted seat at Andy Cohen’s side on WHHL. Sources say she’s moved on from the drama long ago and didn’t care to relive it. That left Kyle Richards scrambling to fill Glanville’s stilettos.

So, what can we expect on the finale’? Will Lisa Vanderpump continue to spread her barely concealed disdain? Will Eileen Davidson continue to attempt to be relevant? Will Yolanda Foster continue to be the peacekeeper and voice of reason? Will Lisa Rinna continue to blurt “addiction” every five minutes? Will Kim Richards be gunning for Lisa Rinna? Will Brandi Glanville engage? Will Kyle Richards be begging for validation from the rest of the cast?

Kyle will likely be playing chicken little with her newly learned Brandi Glanville “intervention” gossip gleaned from Lisa Rinna and will be making the usual rounds. That seems like the likeliest scenario. Unfortunately, at the time of filming; Kyle Richards hadn’t seen the footage of the Brandi Glanville and Lisa Rinna conversation that fans were privy to last week. Glanville has already scoffed at Rinna’s pot stirring mistruth and laughed Rinna off in her Bravo blog:

“Kyle heard… the word intervention and visibly salivates …about running to Kim with…hurtful gossip. Only stop, rewind. Bravo replayed our conversation, and it was Lisa R. who brought up the word “intervention,” NOT ME. I quipped back, “Maybe you could do an intervention with (for) all of us.” Not quite the same thing.”

At the time of filming, however, sources say Kyle couldn’t have known what was said privately between Glanville and Rinna. That means fans will likely continue to see Kyle make a fool of herself spreading Rinna’s seeming fabrication. What will be interesting is to see whether Kyle turns on Rinna if the facts of that conversation are exposed.

There is also the question of Kim Richard’s and Brandi Glanville. Will Kim take Rinna’s gossip to Brandi Glanville? Will Kim and Brandi argue or will they ignore Rinna’s never-ending pot stirring? Will Rinna insist she was truthful? How will or Yolanda Foster and Eileen Davison stand behind Lisa Rinna if it’s exposed she twisted words to create camera time? Not just any words but telling Kyle a lie that was guaranteed to backfire in Kyle’s face? The only certain outcome is that eventually Rinna will be left squirming in her seat. She lied and the fans saw it last Tuesday night. Will this be exposed on Tuesday’s finale’ or on the reunion specials?

Fans saw Rinna spend an entire season trying to undermine Kim Richard’s reputation and drive a wedge between Glanville and Kim Richards friendship. After the meeting in Palm Springs between Kyle and Kim Richards, Rinna has now also driven a deeper wedge between the sisters. This can’t end well for Rinna, but will anyone care? Will Rinna care? As Rinna has stated time and again, she’s only out to make a buck. The results of her stirring may have earned her a buck, but her apparent lack of integrity leaves Kyle looking like a fool. It also doesn’t make Eileen Davidson or Lisa Vanderpump look any better. They all backed Rinna. If Bravo’s editing remains steadfast, Kim will emerge victorious in her assertion that Rinna is simply pot-stirring for camera time and Glanville’s trustworthiness to Kim will be vindicated to fans.

These are all possible outcomes that would send Kyle Richards scrambling to the tabloids and NYC for WWHL. Kyle is well aware that after last week’s episode fans know the truth. The crux again is did she know the truth at the time of filming that last episode and was she able to save face on the finale. If not, could that be why Kyle was so eager to guest on Tuesdays WWHL? Staffers say the spot was offered to Glanville, but she turned it down for a more lighthearted WWHL on Monday night. It would seem Brandi Glanville is indifferent to the RHOBH drama and moved on when the series wrapped. It is only Kyle Richards who is desperate for fan affirmation.