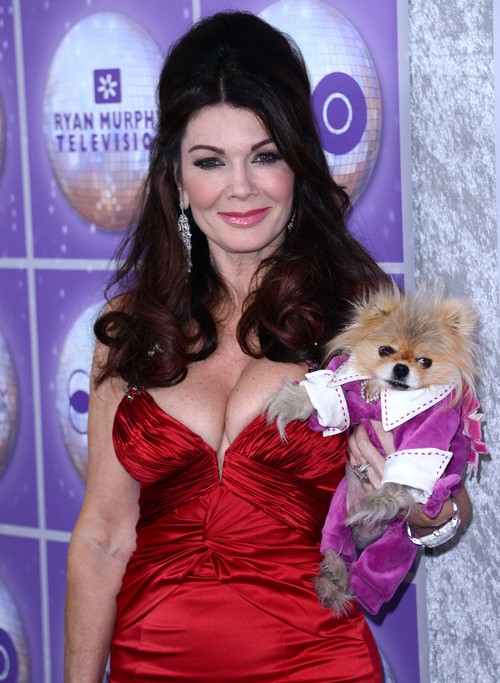 Did an increasingly bitter Lisa Vanderpump just slam her RHOBH’s co-star Brandi Glanville’s charity work via Twitter, making Lisa a hypocrite? It would seem so. Brandi Glanville has stated she has always been an avid supporter of the children’s charity, “Make-A-Wish”. If you don’t know, the “Make-A-Wish Foundation” is a charitable foundation that grants wishes of seriously and terminally ill children. Before her divorce from actor Eddie Cibrian, Glanville and Cibrian both supported “Make-A-Wish” as a couple, now Glanville supports the charity on her own. Fans state that throughout the month of December 2014, Glanville was encouraging sales of “Make-A-Wish” holiday cards online. On a larger scale, Glanville chose, “Make-A-Wish” as her charity of choice when competing on Donald Trump’s “Celebrity Apprentice”. Through “Celebrity Apprentice,” Glanville was able to secure a donation $80,000. $50,000 as winning project manager on a “task” promoting Circle Line of New York City, with a further $30,000 donated by Circle Line of NYC.

Currently, Brandi Glanville has signed up for one of the “Make-A-Wish” Foundation “Walk for Wishes-Los Angeles” yearly walkathon. The walkers sign up, then request that people sponsor their walk and pledge money to the charity. Glanville posted her charity pledge link on both Twitter and Facebook. Her goal is $15,000, not a large amount, but certainly appreciated by the charity and families of the children. “Celebrity Apprentice” winner Leeza Gibbons was one of the first to add her contribution to the cause so dear to so many.

A survey of Glanville’s Twitter page shows she has pinned a general Tweet announcement with information about the walk and a link to support the charity and walk. She has also sent a tweet a day to co-stars and friends asking if they might contribute to the local Los Angeles branch of “Make-A-Wish” and sponsor her walk. Two such Tweets went out yesterday and today.

“@BrandiGlanville: THANKYOU @CarltonGebbia13 for the @MakeAWish walk donation!! You really are the real deal! #LOVEYOU” ThkU Love U2 babe??????

The result has been a steady stream of funds in support of “Make-A-Wish”. RHOBH’s co-stars Camille Grammar, Carton Gebbia, Lisa Rinna, and Eileen Davidson have put aside petty series grievances by immediately making contributions and sponsoring Glanville; they have also tweeted their support. All that is but Lisa Vanderpump. When Glanville added Vanderpump’s Twitter handle to one of several similar inclusive Tweets to coworkers, Vanderpump responded in a disquieting fashion via Twitte

Charitable acts,events and donations of which I do many are not for self acclamation or proclamation.

The very Tweet in itself is an oxymoron, “Charitable Acts, Events, and Donations, of which I do MANY are not for self-acclamation and proclamation”. Well, if THAT Tweet is not a proclamation, I don’t know what is. Further, Vanderpump has just proclaimed her acclaim!

To wit, Vanderpump states she is not only charitable, but also performs “charitable acts”, attends charitable “events”, and “donate(s)” to charities. After reading the above Tweet/proclamation, it is doubtful if anyone could remain uninformed as to how great the charitable breadth of Lisa Vanderpump’s largesse. Her humility is another subject altogether.

Lisa Vanderpump is the second wife of Brit restaurateur and nightclub owner, Ken Todd. Though from humble origins, the two are considered wealthy by Beverly Hills standards and have routinely announced their connections to several charities. Just last year, the Todds filmed a PSA for the Los Angeles “Aids Walk”, which only makes the haughty Tweet all the more confusing.

Are we to take her “Aids Walk” PSA as a proclamation or as an acclamation, or as both? This writer and reader remains unclear as to Vanderpump’s intent. However, as the Tweet went up shortly after Glanville’s the target seems certain. That the Tweet was not made, in shall we say, a charitable manner, is for the reader to decide. However, the context seems clear and the best that any defender can say, is that it was not appropriate. RHOBH fans are saying quite a bit more. The backlash on Twitter is loud and on point. Words and phrases such as hypocrite, smug, bitter, ugly, double-standards, and a host of expletives are being hurled in her direction.

THANK YOU to all who have donated already! Here's the direct link to my @MakeAWish page! http://t.co/AzEM8p7Sc7 Let's make a wish come true!

The ball now lies in Vanderpump’s court, will she acknowledge her bad judgment, Tweet an apology, and donate to Glanville’s page? Or will she attempt to twist her words into something more palatable for fans to chew? The latter is more Vanderpump’s style. We shall see.