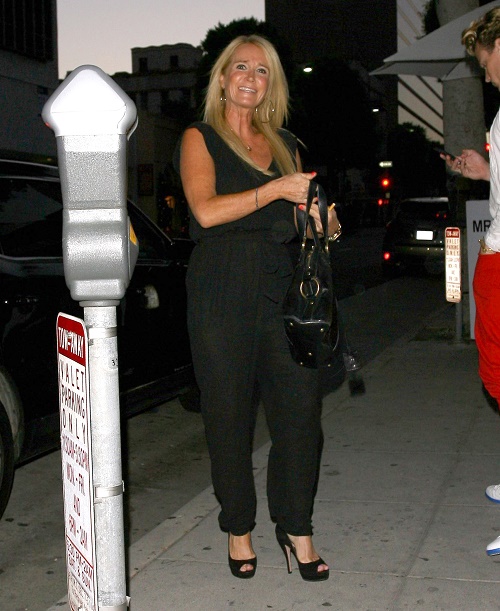 The Real Housewives of Beverly Hills season 5 reunion special is going to be explosive. According to all the RHOBH reunion special teasers, Kyle Richards, Brandi Glanville, Lisa Vanderpump, Yolanda Foster, Kim Richards, Eileen Davidson, and Lisa Rinna are bringing a new level of mayhem and intensity.

In fact, there are so many RHOBH confessions, reveals, outbursts, and arguments, Bravo has turned the reunion into a three-part special. The show will air on Tuesday, March 31 at 9 p.m. ET, and finish the multipart RHOBH season 5 reunion special with the final episodes airing on April 7 and 14 at 8 p.m. ET.

Most of part one of The Real Housewives of Beverly Hills season 5 reunion special will focus on Yolanda Foster. She will detail her ordeal with Lyme disease before Brandi Glanville jumps in, attacking Foster’s family. The argument between Yolanda and Brandi reaches a boiling point after Glanville makes accusations Foster’s daughter is an alcoholic. Reaching her breaking point, Yolanda Foster makes an early exit from the reunion.

In the second part of the RHOBH reunion show, the fight between Lisa Rinna and Kim Richards that began in Amsterdam continues. In case you missed it, Kim Richards has been threatening to expose a mysterious secret about Rinna’s husband. Lisa smashed a glass and lunged for Richards’ throat. Then, in the season finale of The Real Housewives of Beverly Hills, viewers see another Richards and Rinna catfight, but the reunion special will have more than just a shouting match. Rumors allege that Lisa Rinna loses control and goes on a violent rampage after Kim Richards reveals her big mysterious secret; divulging Rinna’s husband Harry Hamlin’s cheating scandal.

Whether or not Hamlin cheated, is up in the air. Us Weekly claims that their source explained Harry Hamlin’s secret affair is “all in Kim’s mind.” However, Lisa’s reaction during the RHOBH reunion was so violent, the cast began questioning Lisa Rinna’s mental health, and were concerned security would have to get involved.

The Richards sisters also get their fair share of drama. The reunion could be the last time Kim and Kyle speak. According to Us’ leaked details, the duo hit a “major breaking point” and the sibling rivalry continues. RHOBH reunion spoilers point to Kim’s alcohol issues and her friendship with Brandi Glanville as the main sources of the feud that has torn the sisters apart.

Andy Cohen, host of The Real Housewives of Beverly Hills season 5 reunion special, claimed that Kim and Kyle had not spoken to each other in four months before the reunion. Cohen shared the news on his show, Watch What Happens Live. Kyle Richards also insisted that she and her sister, Kim Richards, are not speaking. She told E! News her sister’s negativity is too “toxic” and she has accepted that being friends with Kim Richards means she will be “attacked again.”

Rumors of who will be fired from The Real Housewives of Beverly Hills are also brewing. Andy Cohen was pretty open with the fact that Brandi Glanville might be fired from RHOBH. She has lost all her allies – except for Kim and maybe Yolanda – and Bravo isn’t happy with her. Since the end of the show’s taping, Glanville has been complaining that the network made her “look like a train wreck.” According to a source squealing to the Boston Herald, Bravo is fed up with her. Cohen himself has talked to Brandi, informing her that her “actions are a good look for the show” and the network is associating her with falling ratings.

Part three of the special will pack in the drama, but end on a lighter note. However, during the Ask Andy segment of his show, the RHOBH host stated, “There was an 11th hour smoking gun that was revealed… which was amazing.”
What do you think this “bombshell” is? Or, who does it involve and what part did Brandi (most likely) play in it?