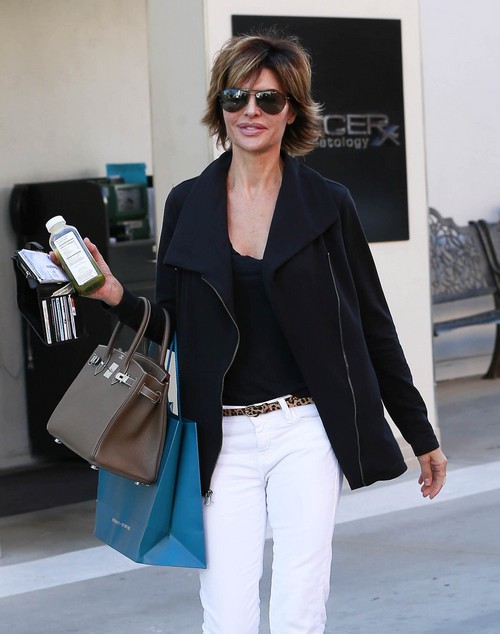 The end of Season 5 of Bravo’s ‘The Real Housewives of Beverly Hills Reunion’ is fast approaching with only two episodes left in the can. After those two air, fans will be eagerly anticipating what will likely be the highest rated reunion special yet. This RHOBH reunion special is touted as the most shocking ever by many who were present. Sources reveal that the reunion has quite a few shockers, specifically former soap actress Lisa Rinna’s anger and violence surpassing even the recent flying glass shards incident after actress Lisa Rinna angrily grasped for actress Kim Richard’s throat. Rumors suggest that when Rinna’s husband Harry Hamlin’s cheating is exposed the former soap star totally loses it.

Lisa Rinna’s outbursts and physicality of that glass explosion, reportedly pale by comparison to what viewers will soon see. Cast and crew were shocked when Rinna went berserk and lost her composure not once, but three times or even more. This time the violence was more terrifying. Even her stalwart supporter restauranteur Lisa Vanderpump appeared shocked at Rinna’s break from civility. It’s rumored that Rinna became so irrationally angry and violent that cast mates questioned her mental health. Others were worried that security would have to be summoned.

Hints of Rinna’s penchant for violence were glimpsed recently on Twitter, when a fan Tweeted to Rinna that “@LisaRinna should have taken a tire iron to Kim Richards in an alley“. Rinna appeared to concur. She adding a disquieting, “I love u” at the end of the violent fan’s wishful Tweet, before Retweeting the message on her own Twitter account to fans and the world. It left many wondering exactly who the “Cray”, short for crazy, referred to in that particular Tweet. Like many odd Rinna Tweets, it was quickly deleted after fan backlash. 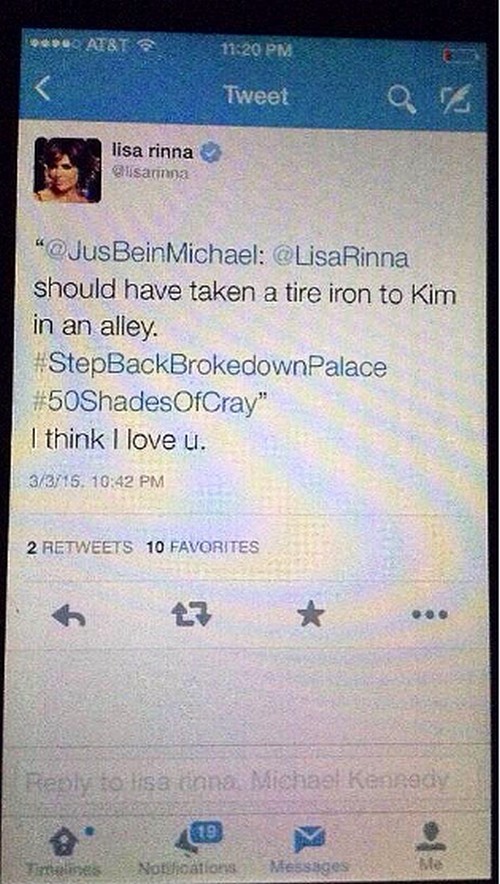 Cast and production members have been weighing in since filming ended, including RHOBH’s Kyle Richards to “E-News”, “The reunion was worse than Amsterdam. The reunion was… I didn’t leave my bed for two days after the reunion. I couldn’t go anywhere. It was just so upsetting”. Contrary to Richard’s statement to “E”, it was later revealed that directly after filming Kyle Richards and husband Mauricio Umansky enjoyed a long dinner on the patio with Lisa Vanderpump and her husband, Ken Todd. The RHOBH co-stars were seen at one of Vanderpump’s restaurants. Both were reportedly still in studio makeup and Kyle was reportedly animated and talkative after filming, which leaves many to question the veracity of her prior statements.

Regardless of that meal and Kyle’s dramatics on “E-News” it has been said that 70’s star, Kim Richards, Kyle’s sister, arrived prepared and used the reunion special to settle scores. A supposed bloodbath apparently followed whereby actress Kim Richards wiped the floor with both Lisa Rinna and her sister Kyle. The sisters were said to have not spoken for months prior to the filming of the reunion, and that an even bigger chasm exists now. Kim Richards has not commented on the reunion.

Others involved in the production have also weighed in, such as Bravo and RHOBH executive producer Andy Cohen. “It was super dramatic. It was emotional,” were the words used by Cohen on “Ask Andy”. He continues to mention the reunion as one of the worst he’s moderated.

RHOBH co-star Lisa Vanderpump, who earlier tweeted Brandi Glanville, “is irrelevant”, but still talks of Glanville constantly, recently tweet gloated, “She didn’t do well at the reunion for sure”. Vanderpump has appeared especially disgruntled for most of the season. Her constant potshots on air at other “Housewives” and on Twitter showcase her bitter view of the series and a distaste for most of her castmates.

Glanville didn’t respond and had her own take on the reunion. She remarked via Twitter, fans would be “shocked at the truth exposed”, the hashtag used at the end of her tweet, “#batshitcrazy”. Brandi Glanville later tweeted that filming of the RHOBH reunion took a lengthy 18 hours. Another Tweet conveyed, “wait for the reunion all true colors will be seen!!” Some present at the filming stated Glanville held her own and considered the reunion rough, and although unfairly outnumbered, won many points, and scored a few surprises of her own.

Amidst all this speculation and controversy, the reunion everyone is talking about almost didn’t happen. Rumors circulated that Glanville considered skipping the reunion altogether but decided to go at the last minute when co-star Yolanda Foster, hospitalized for weeks in Asia, rallied to attend. Former model and RHOBH castmate, Yolanda Foster, wife of renowned composer, David Foster, is suffering from a severe and debilitating bout of Lyme disease. Many question whether she will return for season six of RHOBH due to related health reasons. Foster has not commented on the reunion or next season.

Before the reunion, those two last episodes remain to be seen. We still don’t know exactly how the season ends. Bravo’s preview of the second to last episode show glimpses of a teary-eyed Glanville, Kyle Richards continuing her campaign to sever her sister Kim’s friendship with Glanville, and a furious Kim Richard tearing into sister Kyle. There is also still the mystery of what actress Lisa Rinna’s husband, “Law and Order: SUV”, actor Harry Hamlin, did or did not do, hanging over the drama. Up in the air are Rinna’s possible continued violence and eating disorders, along with the bombshell Kim may or may not lob regarding actor Harry Hamlin. Add to that the alleged lies, cover-ups, plots, addiction, accusations, and an increasingly brittle Vanderpump. All of which leaves much to speculate over before the reunion airs. The only thing certain is that the reunion special will be a ratings bonanza for both the Bravo network and for Cohen.