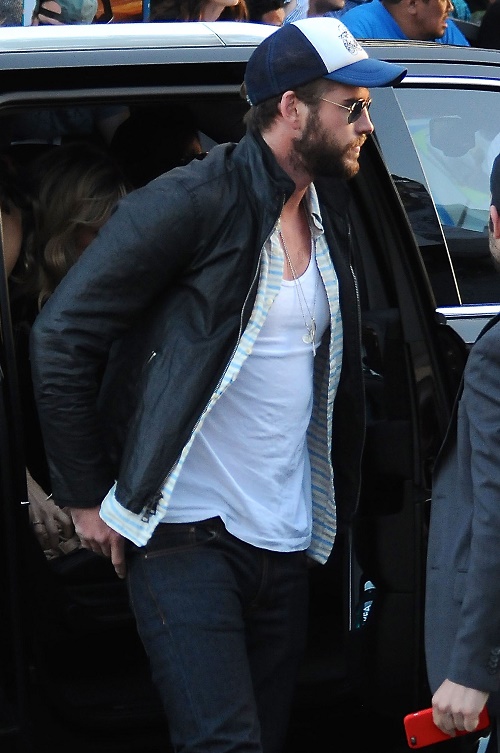 Liam Hemsworth has a new girlfriend! The Hunger Games star is reportedly dating actress Maika Monroe. They met on the set of his new film Independence Day 2 and hit it off immediately. Liam famously dated Miley Cyrus for several years, and then famously dumped her when she started getting a little too weird for him. Since then, Liam has been rumored to be dating several different actresses, but nothing has been that serious – until now!

According to the July 13 edition of OK! Magazine, Liam and Maika have been all over each other on the set of Independence Day 2. An insider dished to OK!, “Everyone has noticed their mutual affection. Maika is sweet and down to earth, and has a zero drama personality, something Liam was attracted to instantly. Liam thinks Maika is the coolest girl he has ever met.” Of course, according to OK! Magazine’s insider, the reason Liam likes Maika so much is because she is nothing like his ex-girlfriend Miley Cyrus.

Maika and Liam’s relationship is reportedly so serious that Liam is making plans to introduce his new girlfriend to his famous brother Chris Hemsworth. Normally, whenever a report pops up that Liam Hemsworth is dating someone new, Miley Cyrus has a meltdown and proceeds to throw shade at their relationship or act out on social media. But it looks like Miley has finally moved on too, and she is so busy making out with her new girlfriend Stella Maxwell that she probably won’t even notice Liam’s name in the headlines. Or maybe she already knew about Liam and Maika – and that is why she decided to start dating girls and staging makeout scenes in front of the paparazzi?

What do you guys think? Are Maika and Liam the real deal? Does Miley Cyrus care, or is she too smitten with her girlfriend Stella? Let us know in the comments below!