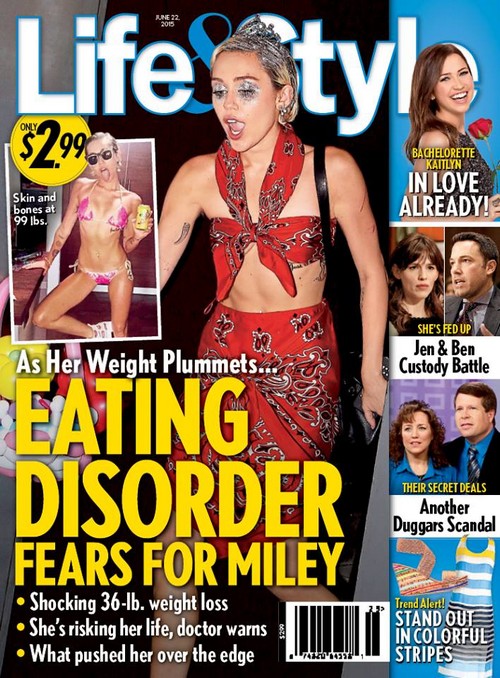 Is Miley Cyrus anorexic? The pop star has been posting some nearly naked pictures of herself in Instagram again, which is nothing new – however fans are astonished by how skinny and boney the singer appears. Miley’s drastic weight loss has caught the attention of some of her friends and family, and they are concerned that Cyrus is “starving herself for attention,” according to this week’s Cover of Life & Style Magazine.

The June 22 cover of Life & Style Magazine features a photo of Miley Cyrus showing off a shocking weight loss, and the headline reads: “Eating Disorder Fears For Miley As Her Weight Plummets.” The cover goes on to reveal that Miley Cyrus is just “skin and bones” and weighing in at 99 pounds, doctors have warned her that she is risking her life because of a pre-existing heart defect. It seems like just a few months ago Miley was at the beach with her ex-boyfriend Patrick Schwarzenegger and everyone was buzzing about how much weight she had GAINED since they began dating. What happened?

According to Life & Style Magazine’s inside sources, “This is the skinniest that she has ever been, but unfortunately no one not even her family can convince her that she is doing herself harm. She thinks that she looks good.” The source goes on to explain that Miley’s rapid weight loss is a result of her depression and hard partying – apparently she has been a mess since her break-up with Patrick, and she doesn’t eat any real food, just candy and booze. Now that she doesn’t have a boy doting on her, “Miley misses being in the spotlight and showing off her new rail-thin body is her way of getting attention.”

In other celebrity gossip news, this week’s cover of Life & Style Magazine tease an exciting story on The Bachelorette Kaitlyn Bristowe – and who she is “in love with.” Ironically, Reality Steve’s spoilers tease that she isn’t in love with anyone from Season 11. Also, Jennifer Garner and Ben Affleck’s messy divorce rages on, and of course the Duggars made the cover and the magazine promises new details on the shocking sexual abuse scandal they are currently embroiled in.

Do you think Miley Cyrus is too skinny? Is this just a desperate cry for attention or does she actually have an eating disorder? Is her break-up with Patrick Schwarzenegger really to blame? Let us know what you think in the comments below!