Jim Bob And Michelle Duggar Under Investigation By Child Services: Chilling 911 Call – What Else Are They Hiding? 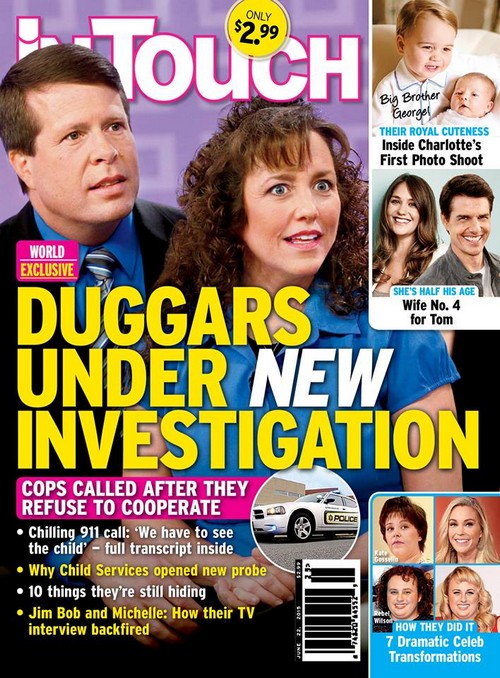 The Duggar Family sexual abuse scandal continues to get darker with every day that passes. A shocking police report revealing that Josh Duggar molested his own little sisters and a family friend nearly broke the internet last month, and the scandal has brought a cloud of suspicion over patriarchs Jim Bob and Michelle Duggar. According to this week’s cover of In Touch Magazine – it is only getting worse for the reality TV family, as new developments are made in the case.

The June 22 cover of In Touch Magazine features a photo of Michelle and Jim Bob, and the shocking headline: “Duggars Under New Investigation – Cops Called After They Refused To Cooperate.” Apparently, after the police report from Josh Duggars sexual abuse went public, and it was revealed that Jim Bob and Michelle did nothing to protect their young daughters from their teenaged brother – Arkansas’s Child Protective Services decided to get involved and make sure everything was on the up and up at the Duggar compound – however Jim Bob and Michelle refused to cooperate! The In Touch cover goes on to reveal that they have a chilling transcript from a recent 911 call, and the inside scoop on “why child services opened a new probe.”

In other celebrity gossip news, this week’s cover of In Touch Magazine promises a tease of Princess Charlotte Elizabeth Diana’s first photo shoot with her big brother Prince George – which are most likely all photos that we have already seen all over the internet after Kate Middleton released them nearly a week ago. And, apparently Tom Cruise has finally found a new wife! The actor has been shamelessly searching for a significant other for weeks now and taking applications – it looks like he finally found someone that met all of his ridiculous expectations. Let’s just say, we don’t envy her.

Have you been following the Duggar Family scandal? Why do you think they are under investigation now? The statute of limitations is up on Josh’s case, could there be something equally horrific going down at their house now? Let us know what you think in the comments below!