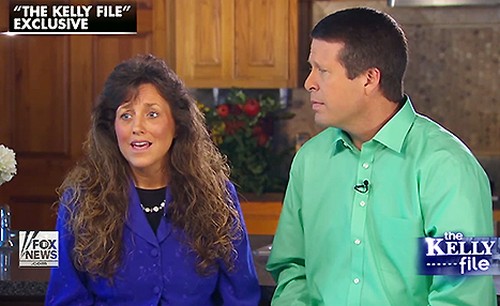 The Duggar family has finally broken their silence of Josh Duggar and his child molestation scandal and case. Michelle and Jim Dugger have a lot to say about the scandal, and in a recent interview with Kelly of The Kelly File on FOX News, both Michelle and Jim reveal many details regarding the allegations against their son. According to E! News Kelly sat down with the two sisters who were the victims of the alleged molestation and it turns out that the two were Jessa Duggar and Jill Duggar.

The two daughters expressed that they were victims of the situation and that it has been an emotional time having to deal with everything over again. Jesse did speak in defense of her brother and said that what he did was “very wrong,” but also said, “I do want to speak up in his defense against people who are calling him a child molester or a pedophile or a rapist, some people are saying. I’m like that is so overboard and a lie really, I mean people get mad at me for saying that but I can say this because I was one of the victims.”

In tonight’s teaser, Jim Bob explains that Josh admitted to Jim Bob that he had “improperly touched some of our daughters.” Michelle Duggar adds that it was very responsible for him to come and admit this on his own. They go on to explain the incident, which took places 12 years ago.

Jim Bob Duggar says, “He was just curious about girls and he had gone in and touched them over their clothes while they were sleeping.” Michelle adds that their first response was to make sure the girls were okay. She said, “It was so important to us as parents to talk to the girls and make sure nothing else had happened.” Unfortunately, this was not the only other incident.

Jim Bob says that the incidents did not stop. “Of course this is public shame that our son did this. We thought at first Josh was on the road to manhood at first. But he was just a kid. He was still juvenile. But there was a couple more times he came and told us what he had done, and we were devastated…This was not rape.”

Kelly reports that one of the victims was very young and would not identify who she was, but mentioned that they were a “single-digit” age.

Josh’s parents sent Josh to receive treatment from a Christian program, hoping that this would change his thoughts. They go onto reveal that when he returned, Michelle and Jim Bob did everything in their power to make this right with the law.

“We felt like the last step was to make things right with the law. We felt like it was an important step for Josh to confess to the police what he had done because he’d broken the law. It was terrifying.”

The Duggar family adds they have buried this a while ago, and the attacks on the family have been extremely hurtful. “Every victim should have the right to tell their own story, not a tabloid,” says Jim Bob. “Every family has things happen in the family and some families may have darker things than others…I know that every one of us have done things wrong, that’s why jesus came. This is more about, there’s an agenda and there’s people purposing to bring things out and twist them to hurt and slander.”

Michelle Duggar wants people to know that their daughters have been extremely hurt by these attacks, and she even says that all of the slander and gossip regarding Josh Duggar’s child molestation scandal has affected the family more than the incidents that happened 12 years ago.

on Friday, June 5 a one hour special will air on Fox at 9pm discussing the incident more.