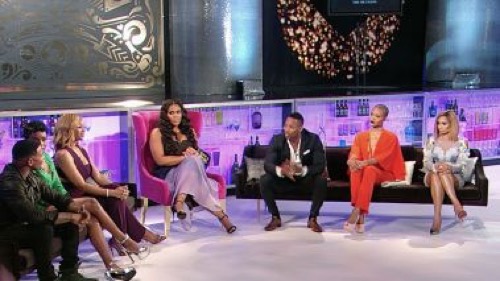 On the last episode, Momma Dee’s children may not make it to her wedding; Margeaux shared a secret with Nikko; Stevie had a proposition for Mimi; and Joseline delivered a big performance without her husband by her side. Did you watch last week’s episode?  We did and we recapped it right here for you.

On tonight’s episode as per the VH1 synopsis, “part 1 of 2. Series executive producer Mona Scott-Young hosts this reunion edition featuring the regrouped cast and a reflection on Season 1 dramas.”

Nina Parker is the host.

She asks Stevie and Joseline how their relationship has been going since Joseline started working on her career behind Stevie’s back.

Stevie says he loves Joseline and they’re working through some things. Joseline says she no longer thinks with her heart, she thinks with her brain and her pockets, and Stevie is doing the same thing. Nina asks Stevie how he’s been doing since he decided to turn his life around. Stevie says he feels great to be a sober guy.

Nina and Joseline talk about the fact that Joseline gets into fights with a lot of people. Joseline says she only gives people what they give her. “If you’re nice, I’m gonna be nice. If you’re a bitch, I’m gonna be a bigger bitch,” she says. Nina asks Joseline where she was at the beginning of the season, and she says she was in Puerto Rico focusing on herself.

Nina asks why Mimi sat down to talk to Joseline, and she says it was because Stevie told her that Joseline was going to apologize to her. She says that’s the only reason she went.

Joseline says Karlie is a messy friend.Karlie says she was only being a true friend, but Joseline says that if someone came to her and told her rumors about Karlie, she wouldn’t laugh because they’re friends.

Nina asks Joc about his multiple children with multiple women. He says that none of his children were mistakes.

Nina then brings up the fact that Scrappy has managed only to have one child so far. “God won’t give you more than you can bear,” he says. “No, they have abortions,” Erica says.

She says she was talking to her weak ass baby daddy and she doesn’t need anyone else to pipe in. Scrappy stands up, and she stands up, screaming at him “what are you going to do?” as security guards separate the two. “Joc and I have never stopped seeing eachother, so it’s pretty easy,” she says.

Nina aks Joc if that’s true and he says “partially.” Nina asks Joseline why these women stay with Joc despite his behavior, and Joseline says he probably has good d.

Nina asks Sina about a rumor that she drugged Joc before filming their sex tape. They talk about the fact that Joc was sucking her toes in the video. Sina says that shows they have chemistry, because it takes nothing to get him to suck on her toes.  Joc says she put something in his drink. Karlie tells KD that Joc is always trying to sleep with everyone.  She says he was trying to get with her at the wedding.

Joc denies these accusations completely, and Karlie takes her earrings off and throws them across the room. “He did it in front of me and Stevie,” Joseline says.

Karlie asks Joc if he did not ask her if she wanted to f**k at the wedding.

Nina says she was at the wedding and she saw Joc and Karlie dancing together, and Karlie asks him again if he denies what he said. Joc threatens to walk off the stage if people are going to continue lying, and Karlie says that everything that comes out of his mouth is a lie, and several people laugh. Joc says he didn’t know this was going to be like this.

Nina asks Sina point blank if Joc has seen her since he was with KD.  Sina says yes without hesitation. Joc denies seeing her, and Sina tells him not to make her go there. Nina changes the subject of the conversation and asks Karlie why she felt the need to go after Joc’s wife if she didn’t care about him. She says she did not tell Sina to come into her shop and ask for help with her situation.

Joc asks Sina how she could get together with a raggedy ex of his like Karlie when they have kids together.
Nina asks KD how her relationship with Joc is. “We’re together,” she says. Nina asks Joc to confirm and he asks her who he is sitting with right now.

Rasheeda says she should ask him that, because that’s what she has been trying to figure out. She says that he spends a lot of money continuously while she splurges occasionally. Nina asks Kirk why he does this, and he says it’s his money.

Clips show the drama between Rasheeda and Ashley, Kirk’s artist whom Rasheeda suspected Kirk of having an affair with only to find out she was a lesbian by bursting into her hotel room.

Nina asks Ashley if she was trying to mess with Rasheeda, and Ashley says that she thinks she just has a flirtatious personality.

Nina asks why she didn’t just tell Rasheeda that she was a lesbian in the first place. Ashley says Kirk knew about her lesbianism, but he doesn’t always tell Rasheeda everything.

A fan question asks which woman on the cast Ashley would choose to hook up with.  Ashley says that Joseline has always been the baddest bitch and the Puerto Rican Princess. “You catch me on a wild night, you never know what happens,” Joseline says.

Joseline says Nikko is gay, seeing he isn’t sleeping with women and that’s why he doesn’t have kids. She criticizes him for not having kids at his age, pointing out everyone else in the room who does have kids.
Stevie and Nikko lunge at eachother, and several security guys have to restrain them.

Margeaux says she is a supporter of the LGBT community and that starting gay rumors implies that being gay is bad. Joseline says that she said Nikko was undercover, and that she is gay.

Nina changes the subject because the conversation is going nowhere.

Jessica says Joseline acts like she is a bum bitch trying to talk to her. Joseline confirms that the two of them did have lockers next to eachother at the strip club in Miami and that Jessica Dime was not lying.

Joseline says they have threesomes and that’s not a secret, and they have friends. She says Stevie knows she likes pussy more than she likes dick and he doesn’t mind her liking women.

Jessica Dime says she wouldn’t do it unless there was money involved with Stevie there watching.Joseline says that she knows if Dime needs any help she will help her. Dime asks her why she didn’t say that to Karlie, and Joseline compliments her by calling her hot and sexy.

Nina immediately asks Mimi if threesomes is a pattern for Stevie and if the two of them did it together when they were younger. Mimi says yes, and that they did do that togetehr, just not as much as he and Joseline do because she isn’t into women like that. Stevie laughs, saying he doesn’t remember that.