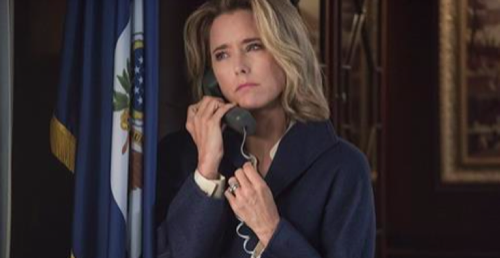 Tonight on CBS Madam Secretary airs with an all new Sunday October 4, season 2 Premiere called, “The Show Must Go On” and we have your weekly recap below. On tonight’s episode, Elizabeth (Téa Leoni) must take the oath of office when the president’s plane disappears over the Pacific Ocean in the Season 2 premiere.

On the last episode, when Elizabeth confronted her former friend Juliet, she flashed back to when then-CIA Director Dalton offered her a job that would have changed the course of her life. Also, Stevie and President Dalton’s son, Harrison (Jason Ralph), began a relationship that had consequences. Martin Bashir guest stars as himself. Did you watch the last episode? If you missed it, we have a full and detailed recap right here for you.

On tonight’s episode as per the CBS synopsis, “Elizabeth must take the oath of office when the president’s plane disappears over the Pacific Ocean in the Season 2 premiere. Meanwhile, Henry’s new Defense Intelligence Agency handler asks him to recruit one of his Russian students to work for the U.S. government.”

Tonight’s episode of Madam Secretary kicks off at the Pacific Rim Nation golf tournament, the president was unable to make it – so that vice president has stepped in. The VP Delgato hits the greens with Chinese leader Chen, while Chen is trying to talk politics, the vice president is complaining of not feeling well –he doubles over and begins vomiting on the green.

Elizabeth’s team is briefing her on the Pacific Rim talent competition – they want her to sing. Elizabeth complains that it is ludicrous, Nadine warns her that it has much more political significance than she realizes. Apparently the Cambodians are huge fans of Billy Joel. Elizabeth and her team get a note from the medical team, the Vice president was taken to the emergency room with flu-like symptoms, however he is stable. Meanwhile, Henry is at work too at the War College while he is lecturing he receives a text message from a blocked number. It says, “Come In.”

After class, Henry meets up with his new contact at the DIA – Jane Fellows. Jane explains to Henry that one of his students, Ivan – is training to serve under a Russian General is on their radar, they think he could be an asset for them. Jane wants a complete psychological analyzation of him. Henry warns her that he is very patriotic, he doesn’t think tey will be able to flip him. She explains that he is a closeted homosexual, and they plan to use that information to convince him to work for the US. Henry is obviously not happy, it’s clear he doesn’t want anything to do with their plan.

The next morning, Elizabeth, Henry and the kids are getting ready for work and school. Jason needs his parents to sign an essay that he wrote. Apparently he got a “C” on it – because he wrote about a woman in prison as a leader of society. Alison has better news, she was just elected as a peer mediator at her school. Her parents are thrilled, Jason jokes that all it means is she gets to hold the “talking stick.” While they are chatting, Elizabeth gets an urgent message from Russell.

Elizabeth arrives at Russell’s office – they have a problem, Air Force One is missing. They lost all contact while they were over the Pacific, they have been offline for nearly an hour. They think that the plane’s computer system may have been hacked, but the tech analyst says it was impossible – they had the strongest firewall ever built. The other possible explanation is that the place has crashed. Whatever is going on, they need an acting president – and the VP is in the hospital. Pro Tempore of Senate is next in line, Elizabeth and Russell rush off to locate him. In the meantime, Elizabeth runs in to the National Security Advisor, and learns that he is also retiring and today is his last day.

Elizabeth and Russell track down Senator Gates and brief him on Air Force One. So far there is no news –they are still out of communication and they have troops out looking. The Chief Justice is about to swear in Gates, however they realize that he is incompetent, and just had a stroke a few months ago – he thinks Reagan is still the President. They have no choice – Elizabeth is the next in line, the Chief Justice swears Elizabeth in as the interim President of the United States.

Stephanie is at Gracemore Hotel with her boyfriend. He wants her to skip work and order room service with him. Stephanie borrows his jacket and when she puts it on a beg of heroin falls out of the pocket. Harrison swears that he is sober and that it is an old stash – he forgot it was in the coat. While they are arguing over the drugs – the secret service arrives. They inform Stephanie and Harrison that there is a “situation” and they both need to be taken in to custody. Meanwhile, Henry is completely unaware that his wife is not the President – he’s at work snooping around Ivan, he joins him in the cafeteria for lunch.

Elizabeth’s husband and kids are rushed to a secure room in the basement on the White House. Elizabeth and Henry learn that Stevie was in the hotel room with Harrison – they are not pleased, Elizabeth tells Henry to let it go and they will talk about this all later at home. In the safe room, Stevie takes her dad aside. She confides in him that she has heroin in her pocket, and tells him she found it in Harrison’s coat. Henry loses it and rants about her decisions, and how foolish she is to date someone in recovery – who also happens to be her mother’s boss’s son.

Russell calls for Elizabeth, there is news on Air Force One. On of the pilot’s of the fighter jets caught up to the plane. The pilot on Air Force One uses morse code to communicate with the other plane. The pilot says that everyone on board is safe and secure – they lost all communication, and that is all. Elizabeth orders them to make sure the hangar is completely secure so that they can land the president’s plane, then she wants Air Force One dismantled to see what happened to the lines of communication and make sure it never happens again. A few minutes later, Russell returns to Elizabeth’s office and tells her that the president has landed and he is safe – she is no longer the president.

Henry meets up with his contact, Jane, he tells her that Ivan is a no-go, he’s a ticking time bomb. He thinks that they should recruit his other student Demetri. Jane agrees after she hears his analysis on Demetri and then she tells him that it is his job to recruit him as a spy and he will serve as his handler. Henry is taken aback, he did not sign on for all of this when he joined the War College.

After all the drama dies down, it’s time for the Trans Pacific Talent Show – 10 minutes before Elizabeth is set to take the stage she begins having a panic attack because she is tone deaf and doesn’t want to make a fool of herself. While she is hyperventilating in to a brown paper bag, Daisy and Nadine take the stage and perform the song for her.

Russell text Elizabeth after the talent show, he calls her in to his office for an emergency. Apparently, they analyzed Air Force One – and it turns out the communication shutting down was a malware virus that was planted on board. It was an act of war.