Madam Secretary Finale Recap – Elizabeth Accused of Espionage: Season 1 “There But For the Grace of God” 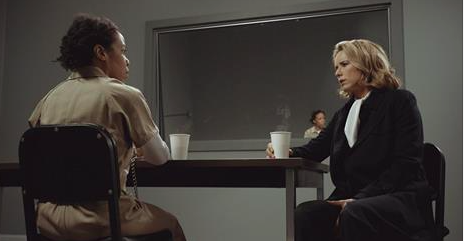 Tonight on CBS Madam Secretary airs with an all new Sunday May 3, season 1 finale called, “There But For the Grace of God” and we have your weekly recap below. On tonight’s episode, season 1 ends with Elizabeth [Tea Leoni] flashing back to when she turned down a job offer by then-CIA Director Dalton [Keith Carradine] that would have changed the course of her life; at the same time, she confronts former friend-turned-traitor Juliet. Elsewhere, Stevie [Wallis Currie-Wood] and Harrison [Jason Ralph] enter into a relationship with consequences.

On the last episode, as Elizabeth prepared for the arrival of Iranian President Shiraz to sign a nuclear treaty, she uncovered a top secret plot to assassinate him on United States soil. At the same time, she had to deal with a massive protest by the Human Rights Campaign in response to Iran’s planned to stone a gay citizen to death. Also, Elizabeth saw a therapist (Marsha Mason)to deal with her PTSD. Marsha Mason guest stars as Elizabeth’s therapist, Dr. Kinsey Sherman. Hill Harper guest stars as Juliet’s husband, Aiden Humphrey. Did you watch the last episode? If you missed it, we have a full and detailed recap right here for you.

On tonight’s episode as per the CBS synopsis, “when Elizabeth confronts her former friend Juliet, she flashes back to when then-CIA Director Dalton offered her a job that would have changed the course of her life. Also, Stevie and President Dalton’s son, Harrison (Jason Ralph), begin a relationship that will have consequences. Martin Bashir guest stars as himself.”

Tonight’s episode of Madam Secretary kicks off with Elizabeth heading in to the interrogation room with Juliette – she announces that she is “here to save her life.” Elizabeth offers her letters from her kids and possibly even visitation. She demands to know if there are any more rogue agents that she missed – Juliette snaps that Elizabeth is responsible for George’s death and she turned on everyone and everything that she cared to claim about. Elizabeth is obviously shake up – she storms out of the interrogation room.

Elizabeth has a flashback to 2005 – she and Juliette are walking through the CIA Agency, Elizabeth is on her way to see Conrad about the Beghdad report she wrote on scaling back on interrogation tactics. She jokes that she will just hard on the Geneva Convention until she can provide solid proof on karma. Elizabeth rants to Juliette that “torture is a waste of time and money.”

After her run-in with Juliette Elizabeth heads to her office where her entire staff is waiting for her – they have a video of Senator Careathers. Careathers has been ranting to the media that the President and government are covering up the coup in Iran and has dubbed himself the “truth teller.” Elizabeth isn’t worried about Careathers – Jay warns her that conspiracy theories are dangerous and can snowball out of control.

Flashback to 2005 – Elizabeth heads in to her meeting with Conrad. TO her surprise she isn’t in trouble, he raves about her Baghdad report and says that she has some valid points and he has been passing it around. Conrad announces that he is appointing her Station Chief of Baghdad, he has to show the White House that they have a clear direction they are working towards in Iraq.

While Elizabeth is reminiscing about her meeting with Conrad in 2005, Careathers storms in to her office. He hand-delivers her a subpoena. Elizabeth is being called before a Senate Investigative Committee to see what part her office played in the attempt to overthrow the government in Iraq. Elizabeth rants that Careathers is just doing this to boost his run for Presidency.

Elizabeth is freaking out because she has no idea what info Careathers could have on their mission in Iraq – the President came clean about everything on live television and although some of their practices were unorthodox, they weren’t illegal. Her team has feelers out to see if they can figure out what “smoking gun” the Senator thinks he has that will prove a cover-up.

Later that night Elizabeth heads home, she and Henry sit their three kids down and warn them about the Senate Investigative Committee. Henry explains that the press is going to be out for blood and there is going to be a lot of drama. Elizabeth’s son rants that he wants her to quit her job as Secretary. She reassures him that the Committee isn’t going to find anything, because she didn’t hide anything.

The next day at the office Blake is having a meltdown – Daisy gave him a portrait of Marsh that needs to be hung at some sort of government office since he passed away. There is only one problem, no one will take the portrait off their hands. He rants that there is no “Hall Of Traitors” in DC. Daisy tells him to try offices in Marsh’s hometown.

Russell pays Elizabeth a visit in her office, he updates her on Juliette – she is refusing to work with the FBI. DOJ is seeking the death penalty – and they are going to fasttrack it. And, Elizabeth is off the hook, Russell got the subpoena shut down based on executive power. Elizabeth rants that she can’t take the easy way out – if she doesn’t go to the Senate Committee then it is going to look like she is hiding something, and she isn’t hiding anything. Russell calls the President and tells him that “Elizabeth is declining executive privilege.” He passes the phone to Elizabeth and the President orders her to take the privilege – she has no choice.

Elizabeth heads home for dinner with her family, she explains to them that the Senate Committee has been shut down and it is technically good news. Stevie heads down stairs in an evening gown – she reveals that she is going to her first event at the White House with Harrison Dalton, he just got out of rehab. Elizabeth and Henry are thrown for a loop, but they don’t have any time to talk to Stevie about it because there is a knock at the door. A server has arrived with a subpoena, now they are subpoenaing Elizabeth’s husband Henry to go before the Senate Committee.

Elizabeth calls her assistant ASAP, he rushes over and explains that the reason they are subpoenaing Henry is because Elizabeth shared internal information with him about Marsh and the coup – which means that technically she is guilty of espionage. Henry wants to tell the truth – Elizabeth’s assistant tells him that he has to plead the fifth, he can’t testify to the committee, they’re finding him a lawyer. Henry insists that they didn’t do anything wrong.

Henry and Elizabeth head to bed and Henry insists that he isn’t going to let his wife take the fall. Henry rants that Careathers lacks integrity, and he desn’t have to be ethical – he plans to lie for Elizabeth. Meanwhile, Stevie is on her way home in the limo with Dalton. He tries to kiss her and Stevie shuts him down and reminds him that they are “just friends.”

Blake is still at the office working late – he confesses to Nadine that he has been trying to find a building that will accept Marsh’s photo and hang it on the wall. It’s a violation to destroy the portrait and throw it away, but he has literally tried every building in the US and no one will accept it. Nadine reassures Blake that she will take care of it for him and find a place to hang the portrait.

Elizabeth can’t sleep and she gets up in the middle of the night to clean the house and scrub the kitchen – Russell Jackson shows up on her doorstep. He demands to know if it is true and she shared classified information with her husband. Russell says that the President has another term to campaign for and they are going to have to put some distance between her and the President. He warns her that if the investigation goes badly tomorrow when Henry takes the stand – the President can’t support her or protect her. He can’t stand behind her if she is convicted of the espionage act.

The next day Henry heads to the Senate Investigative Committee – just as he is about to take the stand Elizabeth barges in and announces that she is going to testify. Henry is confused, Elizabeth informs the committee that she is waving her executive privileges and she is going to go under oath instead of her husband. Elizabeth comes clean and explains that she confided in her husband Henry when she was investigating Marsh’s crash because she couldn’t trust anyone else, she knew there was a leak in her office. Elizabeth insists that she was just ensuring the safety of her country – and if she had to, she would do it again. Elizabeth finishes her speech and waltzes out of the room, Carethers shouts after her that she wasn’t excused yet. Afterwards Carethers announces he is moving forward and seeking permission from the justice system to press official charges against Elizabeth for espionage. After watching Elizabeth’s speech on the news Stevie is nervous that she is going to be arrested – she texts Dalton and asks him to pick her up, she hops in the limo and begins kissing him.

The next day at work Elizabeth gets the news that they aren’t pressing charges against her – Russell took a poll and 82% of the people think that Elizabeth was right for sharing information with her husband Henry. She heads to the interrogation room to listen in on Juliette’s testimony – she finally took the deal. Elizabeth listens in as Juliette describes how she killed George, Juliette admits that there was a time when she, Elizabeth, and George were all friends – but that was a long time ago and George was a threat to their mission. Juliette has a flashback to her, Elizabeth, and George all out for drinks and celebrating Elizabeth’s new promotion in Baghdad.