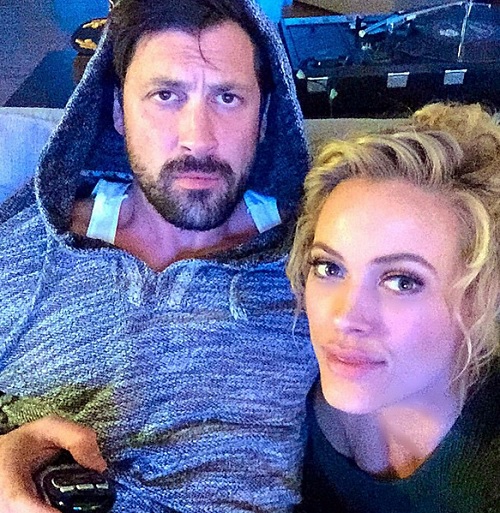 Dancing With The Stars couple Maksim Chmerkovskiy and Peta Murgatroyd are back together! Maksim and Peta were dating off and on for ten months from 2012-2013; however, the pro dancers had a tough time juggling their grueling schedules and were rumored to be fighting constantly. Obviously, Maks’s alleged cheating and rumors of affairs with various women didn’t help matters any.

Maksim Chmerkovskiy and Peta Murgatroyd were rumored to be dating again when they were spotted together in New York City back in January 2015. Neither dancer would confirm nor deny their relationship. Any doubts we had about Maks and Peta’s reconciliation are out the window though – because the couple was spotted on May 11 on a date, and appearing very much like a couple. Maksim and Peta were spotted outside West Hollywood’s go-to eatery Craig’s after filming some scenes for Dancing With The Stars – and they were photographed with their arms around each other. Also, this week, Peta shared a photo of herself and Maks cuddled up on the couch watching television together.

It’s anyone’s guess how long Peta Murgatroyd and Maksim Chmerkovskiy’s relationship will last this time – they seem to break up and get back together more often than most of the people reading this change their underwear. According to one of US Weekly’s inside sources, Maks and Peta are definitely back together and better than ever. Now, we just have to wait and see if they can stay together without fighting like cats and dogs.

Do you think that Peta Murgatroyd and Maksim Chmerkovskiy are in it for the long haul this time, or will it only be a matter of time before they break up again? Are there wedding bells in the Dancing With The Stars pros’ future? Let us know what you think in the comments below!