BY John Panichella on May 6, 2015 | Comments: one comment
Related : Celebrity Justice, Hot News 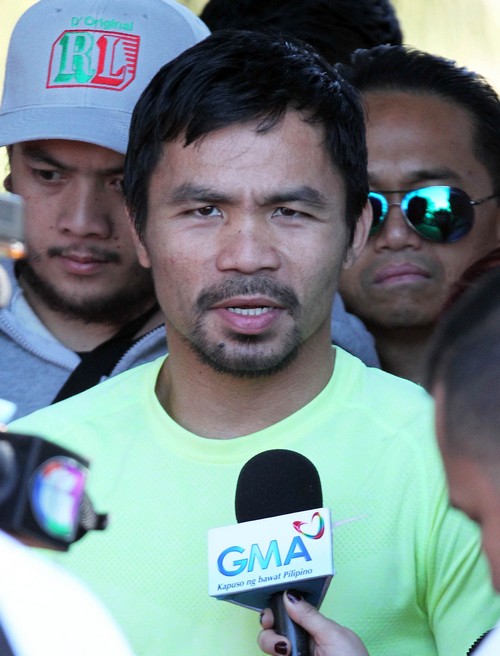 Manny Pacquiao and his promoters at Top Rank are being sued, hit with a class action lawsuit by two fight watchers who claim that he caused fans, pay-per-view buyers, and gamblers to lose a serious amount of money but not revealing his shoulder injury before his highly watched fight with Floyd Mayweather.

TMZ Sports has obtained the lawsuit, which was filed in a federal court in Nevada. The plantiffs, Stephane Vanel and Kami Rahbaran are suing Pacquiao and his fight promoters on behalf of everyone who they believe were cheated.

Vanel and Rahbaran are seeking a total amount of $5 million on behalf of themselves and more than 100 ticket holders who went to watch the fight, but were disappointed when Pacquiao lost. Lawyer for Vanel and Rahbaran stated that the summons was issued on Tuesday, and that Pacquiao and Top Rank will be served within the next few days.

Michael Koncz tells the New York Daily News on Tuesday, May 5, that he filled out the preflight medical form and that he should have noted Pacquiao’s shoulder injury, but he chose not to. He says that Manny Pacquiao had nothing to do with this decision, and is attempting to clear his name by taking the blame on himself.

Top Rank’s attorney, Daniel Petrocelli, is sure that the lawsuit will go nowhere. He said in a statement, “The lawsuit is completely frivolous. Nothing was concealed, and I expect it to be dismissed in due course.”

When asked to respond via Twitter, Manny Pacquiao nor the defendants, Vnael and Rahbaran, made a comment.

The battle between the two parties is all over the boxing match which has become known as the fight of the century, between Manny Pacquiao and Floyd Mayweather. Fans were able to purchase the broadcast for $100 through HBO and other pay-per-view platforms. It was projected that the event brought in as much as $300 million.

What do you think? Should Manny Pacquiao and Top Rank pay up for not revealing that Pacquiao had an injured shoulder, or should fans just deal with the fact that they potentially lost a good amount of money? Let us know in the comments below.

Update: A second class action lawsuit has been filed against Manny Pacquiao along the same lines as the one above – this one cites Mike Tyson calling the fight ‘the dud of the century.’