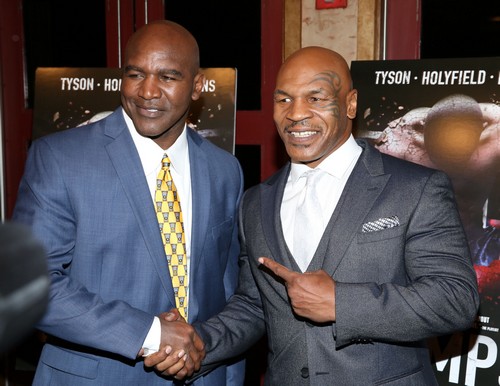 Mike Tyson and Floyd Mayweather haven’t been friends in a long time, but I don’t think anybody quite predicted how toxic their feud has become lately. For example, Mike just went off on a long rant dissing Floyd Mayweather, calling him ‘delusional’ for comparing himself to Muhammad Ali and adding that he’s a ‘little scared man’.

The whole thing started during an interview with the Undisputed Champion Network, when Mike was asked about Floyd’s claim about being the ‘greatest of all time’. A lofty title to claim, especially when most people wouldn’t agree, no?

And one of those people who definitely, DEFINITELY doesn’t agree? Mike Tyson. He went on a long, long rant going into detail about how someone’s ‘greatness’ isn’t just about their performance in the ring. He also added that Floyd’s just a ‘little scared man’ who’s really scared for his own safety and can’t even go to his children’s school without a security team, explaining, “Greatness is not guarding yourself from the people, greatness is being accepted by the people.”

Well… I guess Mike Tyson and Floyd Mayweather’s feud continues. There’s no way Floyd won’t respond to Mike’s diss, especially since Mike Tyson didn’t even attempt to hide his derision or his layer his insults. He went straight for it, and Floyd’s bound to attempt some witty rejoinders. Then again, Floyd had to be drinking the ego kool-aid when he compared himself to Muhammad Ali, even if there were legitimate comparisons to be had. Who compares themselves to the greatest boxer that ever lived, even if it’s true?

What do you guys think about Mike Tyson’s insults towards Floyd Mayweather and their ever-worsening feud? Do you think Floyd Mayweather will try to respond by challenging Mike Tyson to a physical fight, or will it be constrained to insults over interviews? Mike Tyson would destroy Mayweather in less time than it takes to say ‘knock out.’ Let us know your thoughts in the comments below.