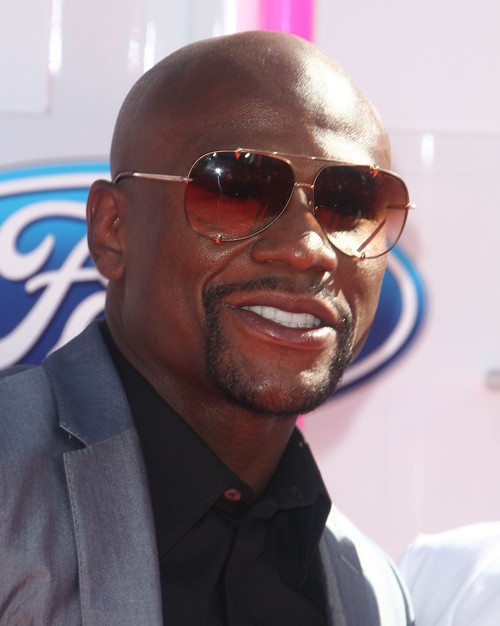 If you thought the recent couples trip T.I. and Tiny recently took to Belize meant that all that Floyd “Money” Mayweather noise was going to die down, think again. Whereas it seems that both T.I. and Tiny are ready to move on and put this behind them, apparently they are the only ones. TMZ captured some pretty damaging audio of Floyd speaking during promotional rounds for his upcoming fight with Marcos Maidana where it sounds as if he is flat out saying that he had sexual relations with Tiny.

Just yesterday at a press conference, someone yelled out at Floyd “What about T.I.?” Now presumably, they were speaking to the now infamous fat burger fight that went down between T.I. and Floyd in Vegas. Now to be fair, the audio is not entirely clear and perhaps my ears did not hear it right, but it sounds as if Floyd is saying that he did indeed sex up Tiny. If you listen closely, it sounds like Floyd says, “What about the b*tch? I was f*cking his b*tch!” Now I don’t know about you, but “them’s fightin’ words!” Honestly, when I heard the audio, I wondered if Floyd knew that T.I. is known as the “trouble man.” We all know he packs guns and stuff.

Fast-forward to today and Floyd is seemingly in clean up mode. Floyd reached out to TMZ Sports to let them know that he did not have sex with Tiny and that the audio they posted was not clear. In fact Floyd says that what he actually said was, “He thinks I’m fucking his b*tch.” Um, okay Floyd.  We have established the audio wasn’t clear but it was clear enough. Also, if that is what he REALLY said, it is not clear why he followed that statement with “Money May gonna make it do what it do.” Sounds like he was bragging in all honesty.

Let’s keep it one hundred here too. T.I. was doing the most around the time his wife posted pics of herself kicking it in Vegas with Floyd. Everyone thought T.I. and Tiny were headed towards a divorce, and everyone figured it was because of T.I. sleeping around with other women.  It was almost expected that Tiny would find her a rebound revenge hook up and Floyd seemed like a not too shabby choice. Now who knows what goes on behind closed doors, but I highly doubt that T.I. and Floyd were throwing blows at Fat Burger over a platonic friendship. Also, the way Tiny dipped out on Floyd on the red carpet at the BET awards also suggests that something probably definitely went down.

Considering that all of them are living that Hollywood fast lane life, it seems they could let bygones be bygones and blame the tryst on the al-al-al-al-al-alcohol. Now with this latest development, it may be too late for all that, but we here at CDL are always trying to promote the peace. As these shenanigans take there course, we are interested to know what you think is going on here. Listen to the audio, what do you think Floyd said? Do you think Tiny and Floyd really hooked up? Help us wash out this dirty load. Share your thoughts in the comments section below.