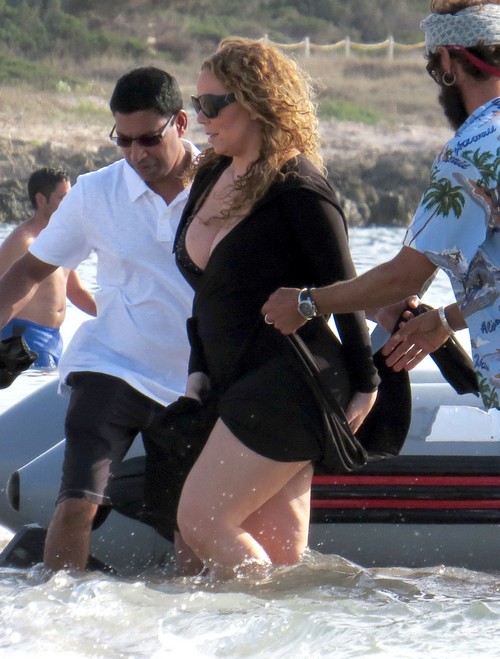 It will be interesting to see if the Cookie crumbles when Mariah Carey hits the set of Fox’s surprise hit TV show Empire. The National Enquirer reports that Taraji P Henson, who plays matriarch Cookie Lyon, is not happy that Mariah Carey is bringing her diva ways to the set of Empire thanks to director Lee Daniels.

Mariah Carey is besties with Lee Daniels from their work on his breakthrough film Precious, so he’s given carte blanche to the pushy singer and cast members are worried Mariah will wreak so much havoc on set she could ruin the show. Taraji P Henson told Lee Daniels that Mariah Carey could wreck Empire like she did American Idol, according to sources cited by the Enquirer.

Unlike other guest stars, including rocker turned actress Courtney Love, Mariah will be playing herself so she’ll have every excuse to play up her diva deliciousness, but how will the core cast deal with this? Precious herself, Gabourey Sidibe, who plays sassy secretary Becky on the show, is said to be solid BFFs with Mariah Carey from their work on the Oscar winning Lee Daniels’ flick.

That means Mariah has at least one ally on set, but we can certainly expect Cookie-esque antics from Taraji P Hensen who has expressed her dissatisfaction over Mariah’s casting to Daniels. According to the Enquirer, Daniels has promised Hensen that she will still be “Queen Bee” on the set, but you can’t imagine for a moment that Mariah Carey will let any sister outshine her in her element – music!

And rumor has it that there’s other fallout to come from Mariah’s Empire casting – Nick Cannon is reportedly slowing down the divorce momentum and may want a share of her Empire loot as part of their earnings split. Mariah is worth half a billion, while Nick Cannon’s net worth is a comparatively paltry $20 mill. If Nick Cannon keeps stalling on the split, Mariah may be even moodier on set.

Mariah has her eye on a new groom already – billionaire BF James Packer – and she wants Nick to fast-track the divorce so she can get hitched again. But Nick may hold out for more loot based on this recent gig which would count as earnings made during their marriage. Mariah may throw some cash Nick’s way to get him to cut her loose so she can move on to bigger and better.

Also coming to Empire in Season 2 are Becky G, Alicia Keys, Kelly Rowland, Ludacris, Lenny Kravitz, Pitbull and Adam Rodriguez. CSI hottie Adam Rodriguez will be a new recurring love interest for Cookie and all but Mariah are planned to play characters, not themselves. Looks like Mariah’s diva ways landed her a sweet deal that few others have gotten.

And, also of interest, Empire patriarch Lucious Lyon will be seen less in Season 2 because of his current marital troubles and messy, messy divorce. Terrance Howard has a track record with the ladies in real life a lot like his Empire counterpart – he’s been accused of domestic violence by several former loves! Since Lucious was Lyon was arrested at the end of Season 1, it will be easy to minimize his role.

And with Terrance Howard in the back seat, Taraji P Hensen was told Season 2 would be all about Cookie Lyon – but now it seems like Lee Daniels has other plans. Taraji needs to channel her alter-ego Cookie and drop one of her best Season 1 quotes, “You want Cookie’s nookie? Ditch the b*tch!” You tell him Boo Boo Kitty!