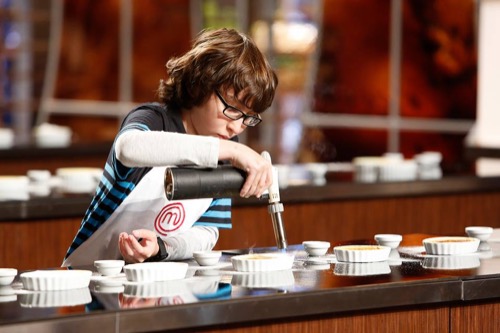 Tonight on FOX Gordon Ramsay’s Masterchef Junior continues with a new Tuesday February 17, season 3 episode 7 called “The Crème De La Crème…Brulee”  and we have your weekly recap below. Tonight, twenty crème brûlée desserts are prepared by the four remaining contestants, who then tackle a difficult raspberry treat before two cooks are selected to move on to the season finale.

On the last episode, in one of the toughest challenges of the season, the six remaining junior home cooks faced the restaurant takeover challenge. The contestants were split into two teams and took over a real Los Angeles restaurant. Find out which team was victorious and who will advance to the Top 4. Did you watch the last episode? If you missed it, we have a full and detailed recap right here for you.

On tonight’s episode as per the Fox synopsis, “The competition heats up as the 4 remaining junior home cooks must prepare 20 crème brulees. The home cook who successfully brulees the most cremes in the allotted time will earn a significant advantage in the next elimination challenge. Next, the junior home cooks will have to each make a complex raspberry dessert dish. The two contestants who impress the judges the most will earn their spot in the finale and be one step closer.”

Don’t forget to join us for our live recap tonight at 8:00pm when MasterChef Junior Season 3 episode 7 airs on Fox. While you wait for the recap, let us know how you are enjoying this season of MasterChef.

On #MasterChefJunior, it’s the #MCJSemifinal with Jenna, Jimmy, Nathan and Andrew. Gordon shows crème brulee and says it translates to third cream. He discusses the dessert then demonstrates the crunch as he cracks the caramelized sugar top. Nathan says he’s never had it because he doesn’t eat out at fancy places. Gordon demonstrates how to sprinkle the sugar and use the blowtorch around to perfect the top without wrecking the texture of the custard.

Andrew says it seems like flan. Gordon demonstrates a few crème brulees that are done wrong. Joe says they have 20 unfinished crèmes that they have to brulee. The kid that completes the most of them expertly will win an advantage in the next challenge. They have just 10 minutes. Gordon says they all must be coated evenly so they will caramelize evenly. Jimmy says this is tricky. Andrew has two torches and is doing two at a time. He calls it “torch power.”

Jimmy and Andrew are zipping along and Graham says Nathan is putting too much sugar on. They are down to one minute left and Gordon tells them to get moving. Gordon says blowtorches off and the judges go to test the crème brulees. The judges go from station to station touching the desserts. They call Nathan down – he fired 13 and Gordon says just one was perfect. He says he held the blowtorch too close and burned the others.

Jenna is next – she fired 15 and Graham says she had four perfect ones. She’s disappointed and thought half of hers should have been good. Jimmy comes down and they tell him he properly bruleed eight. Andrew comes down last and Gordon says he was the only person using both torches. He bruleed all 20 and Andrew says he thinks he did nine perfectly. Gordon says he only got four right. That gives Jimmy the win and the advantage.

Joe says first they’ll find out what they’re making. Joe says they will make an even fancier dessert and says it’s a luxury dessert with a specific type of fruit. Then they dump a few thousand raspberries on the kids and they all giggle. Graham says they chose four technically challenging raspberry desserts and Jimmy gets to choose who gets to make which one. First is a Raspberry Napoleon and Graham says it’s the simplest of the four.

Next is a popular UK dessert – Raspberry Trifle that Graham describes in detail. Third is Raspberry Mouse with compote and Joe says this must be balanced, light and fluffy. Last is Raspberry Tart in a crisp shell. Gordon says this can quickly turn into an epic failure. They ask Jimmy to start with the tart and hand it to one of the four. He chooses Nathan and says he’s known for his desserts so he can try and knock him out since he’s a tough competitor.

The raspberry mousse goes to Andrew. He says it’s delicate and he doesn’t think Andrew can cope with it. He gives the napoleon to Jenna and kept the trifle. He says she’s his friend and he doesn’t want her to go home plus he says he thinks he can beat her in the finale. They each have fresh raspberries and a limited pantry. They get one hour to make the dish and Joe says two will be eliminated while two move on to the finale.

The hour starts and the kids are scrambling immediately. Gordon says he’s worried that Andrew will make the mousse too heavy. Gordon says he’s amazed that Jimmy took the trifle and says making it too dry is a concern. Nathan says he’s happy to have the most complicated dish and says they don’t have a lot of money and he’d love to help his family by winning the cash prize. Graham asks Jimmy why the trifle and he says he’s made all the components, just not the trifle itself.

Joe talks to Jenna and she says she made pastry cream and he says he hopes she doesn’t underestimate how difficult it is. She says she wants to win for the girls and for New York and says people underestimate her. Andrew has a huge mess going at his station and Gordon has him taste his goo and says it’s just too sweet. Gordon asks why he set the mousse knowing it was too sweet. He has no time to make another mousse to fix this and is sweating it.

The kids are all assembling their desserts and Gordon tells them Andrew’s mousse is crazy sugary. Graham says Jimmy’s pastry cream looks like spackle. They discuss that Nathan’s looks good. Jenna is way behind on time. They are down to their last 10 seconds and are all rushing to plate and put on finishing touches. It’s hands off and Gordon says well done. Jimmy is up first and Gordon asks if it’s good enough to get him into the finale. He says he thinks it will.

Jimmy says his layers are off but he thinks the taste will make up for that. Gordon digs in and tastes. He says the cream is tasty but it’s a little acidic. He says overall, he’s impressed. Joe says he’s surprised he chose the trifle and Jimmy says it’s go big or go home. He tastes and says it’s quite good. He says he doesn’t find it too acidic but would like a few more lady fingers. He says he did one hell of a job. Next up is Andrew with his mousse that he scrambled to remake.

Gordon says Andrew looks a mess and says the other mousse would have sent him home. He looks at it then tastes and says the compote at the bottom is delicious. He says the mousse has a texture that’s too wet. He tells Andrew it could have been perfect if he tasted before chilling. Graham says it’s commendable that he went back and tried to fix it. He says the mousse is not fluffy, airy or light like it should be but does have a good flavor.

Jenna is next with her raspberry napoleon. She’s worried about her plating but thinks it will taste good. Joe asks why hers doesn’t look like the sample and she says time got away from her. Joe tastes and asks if she thinks it’s perfect. He walks away without offering a comment. Gordon says he dish looks like it was dropped from the ceiling and asks why two creams. She says she wanted to show her technique. Gordon says the raspberry cream is delicious and it’s not as sweet as he though it would be.

He says it is good but with the time she had, it should have looked better. He says it tastes pretty decent but looks a mess. Nathan comes up with his tart. Graham digs in and looks at it and says it’s like a beautiful little tart. He tastes and says it’s so good. He says he nailed the most difficult of the four and tells him he should be proud. Gordon is next and Nathan says he used cold butter to make it flaky. Gordon says the tasty is crisp, the pastry cream is perfect and says he has one foot in the finale.

The judges go talk and the kids talk too. The kids tell Nathan they’re sure he’s in the finale. The judges also decide to go with Nathan then chat about who will take the second spot. Joe tells the kids they are the best young home cooks in all of America. Joe says the first finalist is Nathan. They send Nathan upstairs to wait then turn to the other three kids. Gordon says the second finalist is Andrew for having the good judgment to start again when he realized the taste was off.

I do think that Gordon set it up for Andrew to make it to the finals by essentially telling him to redo it. If he hadn’t given him that leg up, there would be no way to justify him being in the finals. I do think he’s a really good cook but he tanked this challenge and should have gone home if Gordon hadn’t bailed him out. They hug the two other kid chefs that are leaving. Jenna says she thinks Andrew will win but Jimmy says he thinks it will be Nathan.