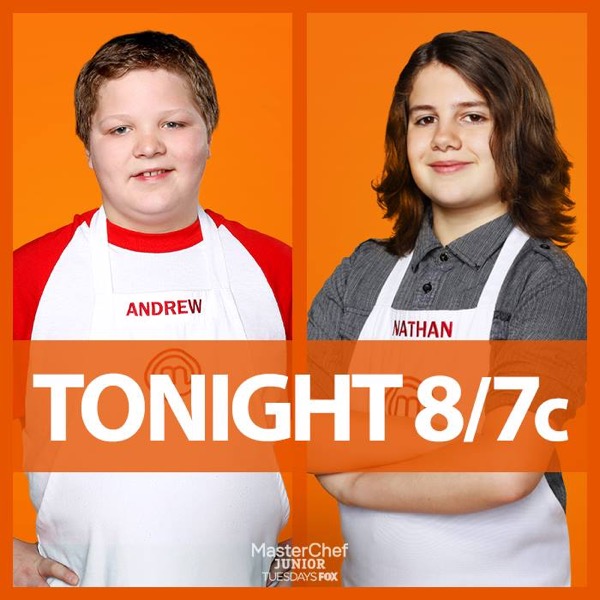 Tonight on FOX Gordon Ramsay’s Masterchef Junior continues with an all new Tuesday February 24, season 3 finale called “The Finale,” and we have your weekly recap below. On tonight’s episode, season 3 ends with two finalists competing for a trophy and a $100,000 prize.

On the last episode, the competition heated up as the 4 remaining junior home cooks had to prepare 20 crème brulees. The home cook who successfully bruleed the most creme in the allotted time earned a significant advantage in the next elimination challenge. Next, the junior home cooks had to each make a complex raspberry dessert dish. The two contestants who impressed the judges the most earned their spot in the finale and be one step closer. Did you watch the last episode? If you missed it, we have a full and detailed recap right here for you.

On tonight’s episode as per the Fox synopsis, “In the exciting season finale, the two finalists will compete head-to-head and prepare the most important menu of their young lives. Find out which talented junior home cook will earn the MASTERCHEF trophy and a $100,000 prize”

Don’t forget to join us for our live recap tonight at 8:00pm when MasterChef Junior Season 3 finale airs on Fox. While you wait for the recap, let us know how you are enjoying this season of MasterChef.

Many months ago, thousands of home-cooks came out to show off their skill in the kitchen. And yet on tonight’s episode of MasterChef Junior, it’s now down to two young home-cooks to compete in order to win it all. Quiet twelve year old Nathan repeatedly impressed the judges with his composed manner and skill all throughout this season. However, boisterous, eleven year old Andrew made just as much an impression with his food as he did with his character. And, hey, he made sure the judges never overlooked him. So really it’s a tough decision and there’s honestly no telling who will win?

You see, unlike other challenges, this final round means there won’t be any more chances to redeem themselves. So now it’s not the time to say “whoops” or “my bad”. Especially as everything these two boys do – will be judged. And either work in their favor or against them.

Hence the final challenge is everything. And the boys were told they only way it was if they cooked an impressive three course meal.

Appetizers, Entrée, Desert. It sounds simple enough but with this competition “simple” can go south at the slightest misstep. And these boys weren’t going to be cooking fried chicken! Andrew designed his three-course meal around the Italian bistro menu meanwhile Nathan decided to go a little more technical by designing his own courses around a French cuisine menu.

Unfortunately, both these menus are pretty hard to cook so if just one thing doesn’t work out – the entire dish could be ruined. And half way into the cooking stage – the judges already think Andrew made a mistake.

It seems Andrew rushed himself because he had braised beef in the pressure cooker and yet he took out early even though he still had plenty of time to actually cook it all the way through. So that might end up costing him the competition. Particularly as the judges haven’t even tested for themselves whether or not the beef was cooked – they saw footage of it and made assumptions off of that.

For the first course of the night, Nathan cooked Roasted Fennel Gratin. And, as his appetizer, it got mixed reviews. Apparently, the judges loved the fact Nathan went after something so difficult though for them it wasn’t executed a perfectly as it could have.

As for Andrew, his cooked Herbed Ricotta received but praise. Before the judges had tried his food, he had told them he was going to be transporting them to Italy and he did so with his appetizer. Yet his entrée, the Braised Beef Cheek Ravioli, set him back.

The ratio of filling to pasta, the plating, and even the idea was all above par. But texture wise, his beef was undercooked and Ramsey was able to say that after one bite. And all across the board, the judges said the same thing. A tad undercooked.

Nathan’s Herb Crusted Lamb Chop, on the other hand, was called the future of cooking. The judges loved it so much that they said if it was paired with Andrew’s appetizer – it would be the beginning of perfect meal.

Hence Andrew and Nathan were neck and neck by time the judges began deserts. First they tasted Nathan’s Earl Grey Tea Tart and as it turns out that not only was that tart ambitious but it also left all the judges stunned. They just could not believe Nathan cooked something so good.

Yet Nathan didn’t have the completion in the bag as much as he thought because Andrew ended up surprising everyone by taking a simple rice pudding desert and transforming it into his one of kind Arborio Rice Pudding. It was simple and incredibly delicious. And it somehow impressed the judges to no end.

So when the judges left to go pick the winner – the choice wasn’t easy! And, in fact, when Ramsay came back out to announce the winner there was a moment he hesitated. Then, after he took a deep breath, he announced Nathan as this year’s MasterChef’s winner.