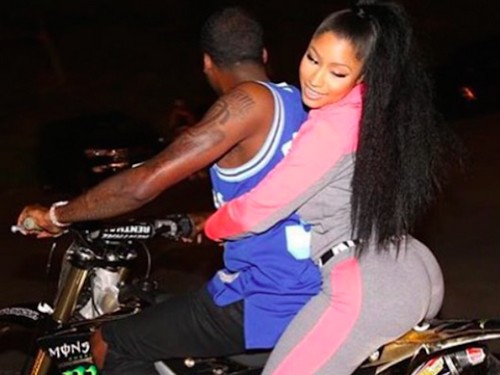 Meek Mill responded to Drake’s back to back diss tracks and in Meek’s long-awaited response, the Philly rapper is apparently threatening to shoot Drake. Apparently Nicki Minaj’s boyfriend forgot that he’s on parole and is facing jail time now with a sentencing hearing on February 5. Are Meek’s new inflammatory lyrics going to affect his parole violation sentence?

A teaser from Meek Mill’s upcoming Dreamchasers 4 album was released and according to Complex, it sounds like the rapper is threatening to shoot Drake. The lyric that has people speechless goes, “When I was saying sh** about the rhymes you ain’t wrote, I can’t wait till we run into ya, I’ma put a gun in ya.”

Well, that’s straightforward enough but was it really wise for Meek to write or even just recite a verse that directly threatens his known rival?

We’ll see what the judge says about Meek’s latest lyrical offering when he’s praying for freedom in February. In the meantime, it looks like Drake isn’t taking the eleventh-hour response very seriously.

We can only imagine what Drake has in store for Meek now, after two diss tracks and a slideshow during Drake’s OVO festival in Toronto that displayed all the meme’s mocking Meek’s horrible attempt at a rap feud.

The whole feud started on July 22 when Mill shaded Drake for not promoting their song together, R.I.C.O. The jab started a war where Minaj’s man claimed that Drake didn’t even write his own music.

Drake responded with a diss track titled Charged Up almost immediately and when Meek still hadn’t responded a week later, Drizzy dropped another tune called Back To Back.

Meek finally responded to the double diss tracks with his own abysmal offering of Wanna Know. Meek’s clap back at Drake was so weak that he really should have asked Nicki Minaj for some help in writing it.

To be honest, Meek should have asked for help in writing his newest diss, which comes three months after Meek lost the rap battle where he never stood a chance.

Meek Mill is headed back to court to see what his punishment will be for blowing off the conditions of his parole. Meek and Nicki Minaj have been trying to convince a judge that Meek has changed and that he shouldn’t have to spend time in jail for his recent violations.

Maybe Meek should have been a bit more creative than to say he would “put a gun in him.’ There really is nothing left to interpretation and it makes a pretty strong case that Meek Mill still has some growing to do.