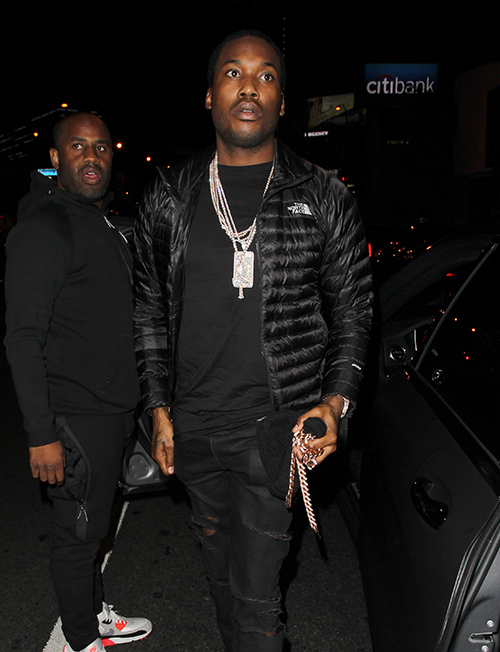 Meek Mill is very possibly headed back to prison. The R.I.C.O. rapper was found guilty of multiple parole violations after recently leaving town without permission. Even after Nicki Minaj stepped up and testified about Meek’s character, the judge just wasn’t buying it. Meek was ordered to return on February 5 to find out if he will be doing jail time for failing to obey the conditions of his parole.

Meek was in court on Thursday, December 17 when Common Pleas Judge Genece Brinkley told the rapper she was ruling that he violated parole. Judge Brinkley told Meek that she doesn’t feel that parole is “appropriate” for the felonious rapper anymore. Meek has violated the conditions so many times now that he’ll likely be spending some time behind bars. While Meek Mill waits for the upcoming court date, he is forbidden from working or performing on stage.

Good thing Nicki Minaj’s Pinkprint tour is over or she’d have to get a new opening act. Minaj does have a Las Vegas show scheduled for New Year’s Eve though and Meek won’t be there. He’ll be stuck in Philadelphia waiting out that sentencing date, hoping not to spend months in lockup.

Meek Mill’s parole violations became an issue after the rapper followed Minaj to California in November for the American Music Awards. Meek is required to get clearance for travel before hitting the road and he reportedly did not ask permission to make that trip. There was also an issue with a benefit concert in New York where Meek performed back in November and wasn’t cleared as well.

The Dreams and Nightmares rapper didn’t help his case when submitting a urine sample to the court. Just last week it was revealed that Meek turned in a drug test that TMZ claims was nothing but cold water. Meek offered up a lame excuse for the crystal clear sample, claiming he drank a lot of water before coming in. The Philly rapper also claimed that a protein shake that he drinks causes his urine to be clear.

Nicki Minaj vouched for her boyfriend on the stand. Minaj told the judge that Meek doesn’t use drugs despite their prevalence in both their industry. Not to mention that the felony Meek Mill is on parole for committing was drug and gun related and both Nicki and Meek rap about drugs in their songs. No wonder the judge isn’t buying that silly protein shake story.

Meek has racked up so many violations that the judge really has no choice but to give him some time behind bars. Maybe that will make Minaj’s boyfriend think twice about skipping town without asking. It would probably be a good idea for the Philly rapper to stop using those “protein shakes” that mess his urine samples up so badly too. Meek doesn’t have much time left before sentencing to try and change the judge’s mind about imposing prison time for the parole violations.