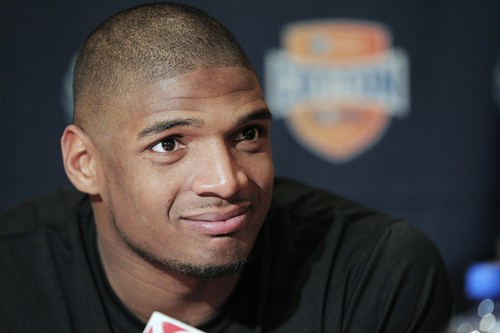 Michael Sam, the first openly gay player to be drafted in the NFL, recently signed a two year deal to play professional football in Canada. The Montreal Alouettes of the Canadian Football League have recently announced that they have signed the defense end.

Jim Popp, general manager of the Alouettes, released a statement saying, “With the signing of Michael Sam, we have become a better organization today. Not only have we added an outstanding football player, we have added even a better person that brings dignity, character, and heart to our team.”

The Alouettes have held exclusive rights to Sam starting for the CFL, since his senior year at Missouri; the year in which he was the SEC co-defensive player of the year.

Michael Sam also released a statement about the news. He says, “I am very excited and proud to join the Montreal Alouettes. I cannot wait to put on the pads, get back on the field and work hard each and every day with my teammates to bring a Grey Cup to the great fans here in Montreal.”

If you do not remember, Michael Sam was drafted by the St. Louis Rams in the seventh round of the 2014 NFL Draft, but did not make the time. After the Dallas Cowboys released him from their practice squad in October, Sam has been a free agent, until now.

During the NFL combine, where Michael clocked 4.99 seconds in the 40-yard-dash, he mentioned that Montreal was still a very practical option for him.

Michael Sam spoke with TMZ before at LAX and when the media outlet asked whether it was his sexual orientation, or level of talent, that caused NFL teams to shy away from him he responded by saying, “I think I was the SEC Defensive Player of the Year last year… so I don’t think it had to do with talent.”

If the NFL is too backwards and prejudiced to sign an openly gay player then it’s their loss and the CFL’s gain. At least now Michael will be able to do what he loves professionally. He will be introduced officially to the public during a news conference held by the Alouettes on Tuesday, May 26. Just one point all American fans should be aware of: great NFL players have often started their career in the CFL – example, Joe Theismann.