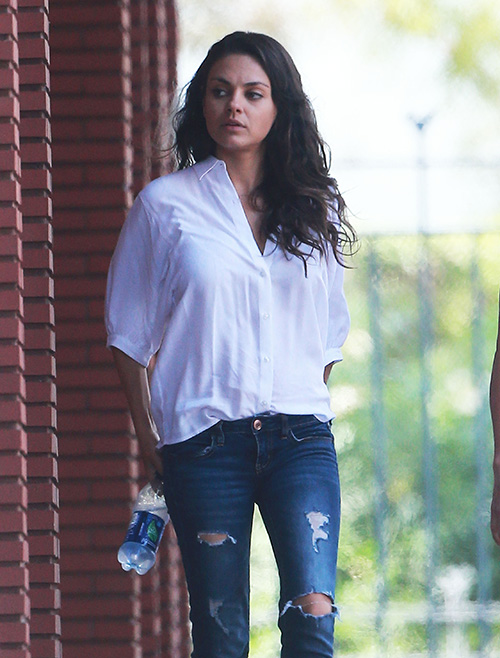 Mila Kunis and Ashton Kutcher’s relationship seems pretty solid – but that is only because the couple won’t work together. Mila and Ashton may have met on the TV set of “That 70’s Show” many years ago, but the actress refuses to work with Ashton on any more projects. That doesn’t say much – if your own spouse doesn’t even want to work with you. Ashton has developed quite the reputation on set over the course of the past few years, and there must be some truth to the rumors about his he-diva demands, or else Mila wouldn’t be banning him from working on her new projects.

According to a new report in this week’s edition of OK! Magazine, Mila recently pitched a sitcom to ABC for her studio Orchard Farm Productions. But, when the executives at ABC tried to include Ashton Kutcher in the idea, Mila quickly shut them down and informed them that she didn’t want his name brought up in the meeting, under any circumstances.

An insider dished to OK! Magazine, “She banned her 37 year old hubby’s name from the discussion. It is a comedy about a stay-at-home dad, which would be perfect for him, but she wants to be independent. Mila doesn’t want to piggy-bac off from Ashton’s success.” Now, that seems legit, but Mila and Ashton aren’t that different from each other as far as success goes. It sounds more like she just doesn’t want to be stuck living with him, married to him, AND working with him. And, frankly, we can’t say that we blame her, especially if the rumors are true about how difficult Kutcher is to get along with on set.

What do you guys think? Is it weird that Mila doesn’t want her and Ashton’s careers to cross paths? Is Ashton Kutcher really difficult to work with? Let us know what you think in the comments below!