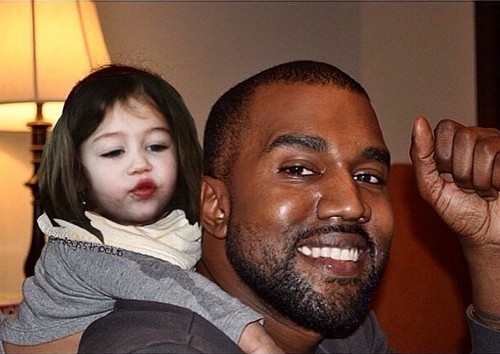 Did Miley Cyrus just diss North West? Miley Cyrus either has some serious beef with Kim Kardashian and Kanye West’s toddler North West, or else she has secret dreams of becoming a Kardashian. Regardless of what Miley’s reasons are – her Instagram obsession with the first lady of reality TV and her family is getting borderline creepy. Miley Cyrus has been posting some pretty badly photo-shopped pictures on her Instagram page, and although she seems to like making fun of a slew of celebrities, North West is apparently her number one target.

Over the weekend Miley Cyrus flooded Instagram with a collection of photos of Kim Kardashian, Kanye West, and North West posing together. Ready for the creepy part? She photo-shopped pictures of herself as a baby and pasted them over North’s face. In another photo of baby North in her father’s Yeezus jacket, Miley once again photo-shopped her face in to the picture and covered up North’s. She captioned the photos “Family” and “Dada.”

Everyone is racking their brains trying to determine what Miley Cyrus could really have against North West? Sure, it is one thing for her to make fun of Kim and Kanye, she has even posted pictures dissing Gigi Hadid and Kylie Jenner – but seriously what did North West ever do to her? Kim Kardashian and Kanye West don’t seem to mind that their toddler is in a feud with Miley Cyrus, and so far they have completely ignored Miley’s stalkerish photo-shop jobs. Hey, anything to stay relevant, right?

What do you think of Miley photo-shopping her face over all of North West’s pictures? Is it funny, or just plain creepy? What is up with her obsession with Kim, Kanye, and North? Deep down inside does Miley secretly wish that she was a member of the Kardashian Family? 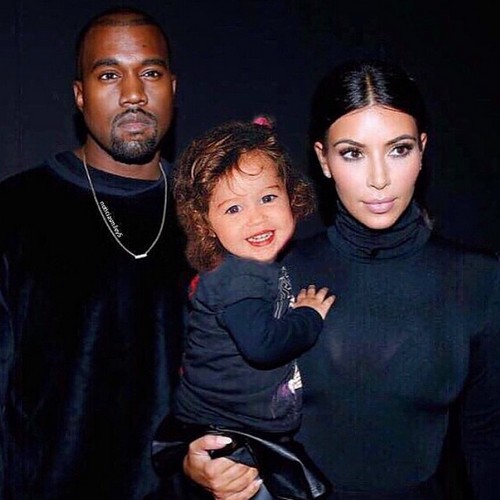