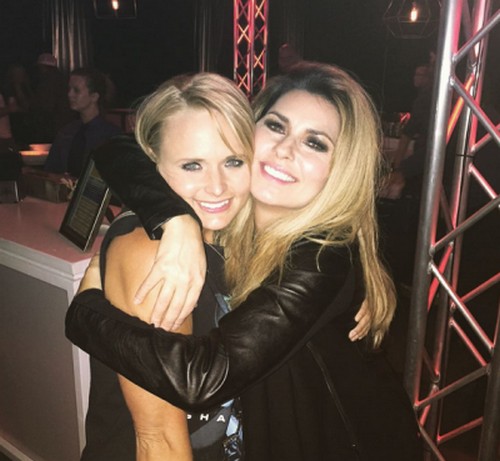 Miranda Lambert is in the middle of a messy divorce from Blake Shelton, the country music singers have been slinging mud at each other ever since they announced that their marriage was over. Both Blake and Miranda’s camps have leaked stories claiming that the other cheated on them. Regardless of what exactly went down (and we will probably never know what exactly that was), Miranda Lambert is SO over Blake – she was out partying in Nashville over the weekend, all smiles. Divorce looks very good on her.

Miranda Lambert was in Nashville, Tennessee for the “Rock This Country” event, and she attended her pal Shania Twain’s concert at Bridgestone Arena. After Shania was doing performing some of her classic hit songs like “Honey, I’m Home” and “Whose Bed Have Your Boots Been Under,” Miranda headed backstage to catch up with Twain and the two singers had a “Girls’ Night.” Shania shared a photo of Miranda and herself posing on Instagram and captioned it, “Girls Night. Loved seeing you! #RockThisCountry.”

The fact that Miranda is out and about, and seems to have recovered rather quickly from the demise of her four year marriage to Shelton only further supports the theory that she may have been the guilty party in their break-up. She doesn’t exactly seem like she is nursing a broken heart after her husband cheated on her. Then again, maybe Miranda was just out celebrating the fact that she was finally free of her cheating husband, seeing as how Blake was caught cheating in the past – he may have been up to his old tricks.

Are you Team Miranda or Team Blake? Who do you think cheated and caused their break-up? Is their divorce official, or is there a chance they could wind up working things out? Let us know what you think in the comments below!