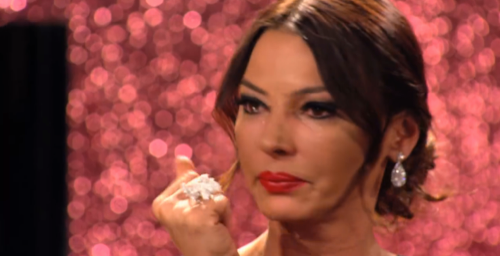 Tonight on VH1 their docu-soap series Mob Wives continues with an all new Wednesday March 18, season 5 episode 14 called “Reunion Part 2,” and we have your weekly recap below. On tonight’s episode, the reunion continues and is something going to bring Drita DAvanzo to tears tonight?

On the last episode, the women of Mob Wives got together for a reunion to talk about the season. Did you watch the last episode? If you missed it, we have a full and detailed recap right here for you.

On tonight’s episode as per the VH1 synopsis, “Conclusion. The women reunite and continue to explore Season 5’s dramas and antics. In addition, the two Natalies face one another to address their season-long battle. Vivica A. Fox hosts.”

Tonight’s episode is going to be another drama packed one, which you won’t want to miss. So be sure to tune in for our live coverage of VH1′s Mob Wives season 5 episode 14 at 10PM EST! While you wait for our recap, hit the comments and let us know how excited you are about the new episode of Mob Wives tonight.

The ladies are back tonight for Part Two of their epic reunion show. And, unfortunately, whatever semblance of control that host Vivica A. Fox might have had in Part One is now gone. Because as we know by now, and what out esteemed host had to learn the hard way, is that this was a group of women that were always going to take things just a little too far!

These women, they have been sitting on their grudges for what could very well be almost over a year now and though they occasionally make a big show of trying to be better women or in this case the most loyal – they only know one way to deal with their issues or address a problem with each other. And that’s fighting it out. Be with words or fists!

You see Renee probably had it the hardest out of all of them in the beginning of this latest season and yet only one person showed up to her defense. Another outcast, herself, Karen. Meanwhile Big Ang and Drita, who’ve always made an extra deal of coming off as sensible – essentially dumped Renee to go hang out with a woman they thought would offer them a better time.

She finally got to meet the other Natalie face to face on tonight’s all new episode and instead of standing her ground which she’s constantly threatened to do beforehand – she did another runner. Something she tends to rely on when the going gets tough. However, this time Drita didn’t let her hide backstage. She actually followed Natalie and told her to come back out.

So that’s what Natalie did. She came out and just like before she and the other Natalie were trading insults. Until, at one point, it went too far when they began talking about domestic abuse.

Apparently that was a trigger of Vivica and so it was the host that then had to step away for a minute!

And, while I hate to say it, was Vivica even prepared for this job? She obviously knew these women were the kind bodyguards had to be on close call for but did she honestly have no idea why Natalie G. was considered a rat? Well, to fill you in, Natalie G. claims her boyfriend used to beat her so she called the cops on him one time. Nat D, though, has a recording in which Natalie is speaking to said ex and in it she’s apologizing for lying about him to the cops.

So what’s the real story? Did Natalie feel like her life was in fact in real danger or did she merely become angry at her boyfriend one day and ended up regretting her actions later?

No matter the case, however, Natalie is now considered a rat for calling the cops in the first place. When you’re one of the mob wives – you handle your own business – you don’t bring in the cops. And yet according to Natalie, she did what did because she was that frightened of her ex.

But Nat D says the other Natalie is still talking to her ex so she doesn’t get how Natalie can do both. Be afraid and still in communication.

So, after being insulted one too many times and particularly by a woman she considered beneath her, Nat D attacked Natalie. She literally skated across the stage and simply went in on the other woman. And in the aftermath of that gruesome fight that was I assure you was quickly broken up, Natalie and her boyfriend London decided it would be if they just left the studio all together. So in a move she’s become known for, Natalie fled.

And Big Ang didn’t have a word to say in her defense.

In the opinion of most of the women there, if you’re going to have a big mouth then at the very least you should be prepared to back it up.