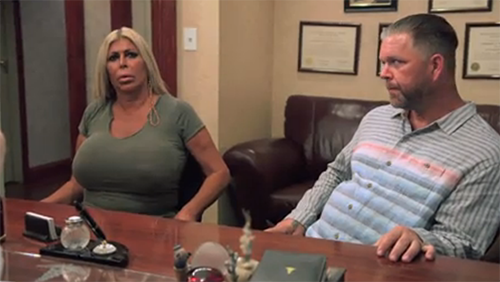 “Mob Wives: The Last Stand” promises plenty of drama in the final season premiering on January 13, 2016. In the extended preview, Karen Gravano continues to have a rocky relationship with her shady beau, Storm. Angela Raiola [Big Ang] learns she has throat cancer and begins the fight of her life as she battles the disease. Renee Graziano declares war on returnee Carla Facciolo. It is going to be a wild ride to give the “Mob Wives” a proper sendoff.

In the clip released by The Wrap, Renee is pretty upset that Carla came back on the show. Apparently, the pair has unsettled business, and Carla wants to clear the air with Renee; however, Renee does not want anything to do with Carla. Oh boy, it will be an interesting exchange for sure.

Drita D’Avanzo made headlines just before the season’s debut due to the book she wrote. Apparently, her ex-husband, Lee, and a select few of the show was not particularly supportive of her business venture. They wanted to shut her down, but Drita would not fold. Drita was seen on the preview screaming, “I’ve been too nice for too long—it stops NOW.”

Big Ang’s cancer returns—Angela is scared this bout could claim her life. She wonders if there is anything she can do to fight the disease. Her “Mob Wives” cast members rally around her to support the one who usually is the one to hold the group together. Big Ang sits in her chair devastated at her cancer diagnosis.

Upset that Storm cheated on her again, Karent meets with him to talk about their strained relationship. Karen wanted to clear the air between them and set boundaries in their relationship. Immediately, Storm tells her, “I am not doing this right now—like ever!” Karen gets upset and ends their rocky relationship. Karen yells at him as he walks away, “Enjoy your life, Storm!”

Drita and Renee have big issues with Carla and declare war on her. They claim that the issues within the group lie in her hands, and don’t want her to be included in the clan. Renee and Drita both agree Carla is not welcome in the friendly circle; however, Carla shows up at a party, which leads to fireworks.

Big Ang and husband Neil Murphy is having major marital issues. Angela’s medical issues have placed a strain, and she isn’t sure if she wants to stay married to him. At one point, Big Ang screams at Neil, “Get OUT; I don’t want to be married to you, anymore!”