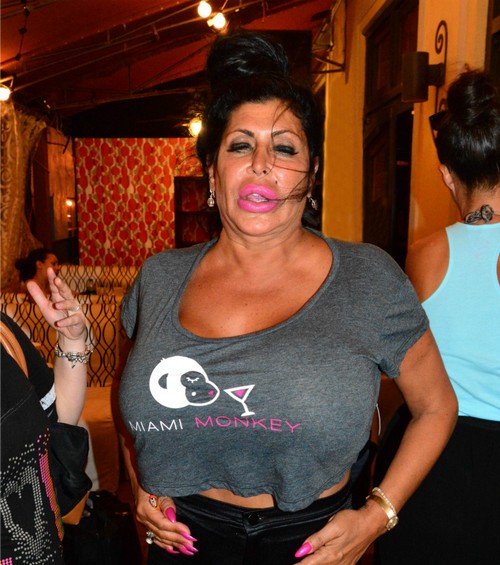 Mob Wives star Big Ang was hospitalized after complaining about pain in her neck – which then turned out to be due to a massive, lemon-sized tumor in her throat. TMZ’s sources add that Angela Raiola AKA Big Ang was admitted to a hospital in Staten Island where doctors planned to perform a surgery and remove the tumor. However, nobody is confirming or denying whether the tumor is cancerous, just that it’s massive and in Big Ang’s throat.

For Big Ang’s case, let’s hope that it’s an easy surgery and one that doesn’t involve too many side effects – she was already scheduled to start filming another reality show [apart from Mob Wives] when the pain began, and she might lose some of those contracts if she’s gone for too long.

Big Ang might also have been experiencing the throat pain for longer than she’s admitted, since she recently made a reality TV public appearance in NYC and kept her throat covered up. She might have started experiencing the pain then, which really means she should have gone to the hospital significantly before she actually went. However, it’s too late to think in hindsight now, and I’m sure Big Ang’s friends, family, fans, and Mob Wives co-stars/producers are all praying that the tumor isn’t cancerous, and that the surgery will be fairly simple.

What do you guys think about the tumor in Big Ang’s throat? Do you think it’s cancerous or benign? And do you think the surgery will go smoothly, or will Big Ang experience complications – which in turn would delay filming for her other reality show, and perhaps even Mob Wives?