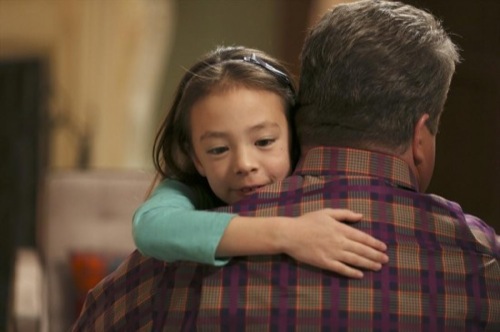 Tonight ABC’s hit show Modern Family starring Phil Dunphy continues with another all new Wednesday January 14, season 6 episode 12 called “The Big Guns” and we have your weekly recap below. On tonight’s show fed up with Ronnie and Amber’s boat on their front lawn, the Dunphys strike back by calling on Phil’s dad and his retired friends to help them prove a point. Meanwhile, Jay [Ed O’Neill] and Gloria [Sofía Vergara] clash over Joe’s potty training; and Cameron [Eric Stonestreet] takes Lily [Aubrey Anderson-Emmons] to clown school, but doesn’t tell Mitchell [Jesse Tyler Ferguson] about it.

On the last episode a brush with death on the way to breakfast had a major impact on the Dunphys, including Claire, who vowed to be more carefree; Haley and Alex, who promised not to fight anymore; and Luke, who started a bucket list. Meanwhile, Manny, who was also along for the ride, said he’ll never get in a car again.

On tonight’s show as per the ABC synopsis, “it’s Jay and Gloria’s anniversary and they can’t seem to get on the same page on what kind of gift to give – sentimental or expensive? And, the Dunphys head to Caltech for Alex’s college tour and while Claire is busy convincing her to choose this school and stay close to home, Phil, Luke and Haley branch off to participate in a psyche experiment. Mitch and Cam are taking a new family portrait with Lily to replace the old one above their mantel, but Lily gives some serious face.”

Tonight’s episode of Modern Family kicks off with Claire having an anxiety attack over the neighbor’s boat – she is sick of it taking up space and being a total eye sore. Claire’s family advises against “rocking the boat” with the neighbors, but Claire says she is calling the city to see if it is some sort of code violation.

Cameron and Lily arrive at home and insist to Mitchell that they were at the library. Mitchell goes through Lily’s backpack and realizes that she has a clown costume inside – Cameron confesses that he took their daughter to a Jr. Clown Convention and he had made it very clear that he wanted to “raise their daughter as a clown.”

Jay heads home with a toddler toilet – and announces that he is potty-training Joe because he is tired of buying diapers. Gloria whines that it is too soon, and Manny points out that when he was Joe’s age he was already potty-trained and counting to ten in more than one language.

Claire and Phil pay the neighbors a visit on their boat, and tell them that it is “tacky” and against city regulations to keep it in their driveway for three weeks later. The neighbors tell them to get off their boat – and refuse to move it. Phil announces that this is war and it is tie for “more drastic measures.”

Cameron gets decked out in his clown costume with Lily – and they make a deal with Mitchell. They tell Mitchell that if Lily can’t make him laugh, then she will “quit clowning.” They put on a horrible clown show – and Mitchell groans that he wants to kill himself, until Lily goes off script and beats Cameron with a bucket and a broom and Mitchell laughs hysterically.

At Jay’s house, he is trying to potty-train Joe. Gloria whines that Joe isn’t ready and Jay needs to let him “go on his own school.” She confesses that Manny didn’t start going to the bathroom on his own until he was 2 ½. He freaks out when he realizes he wasn’t advanced, and Gloria confesses that she made it up just to give him some confidence.

Lily is taking her clown gig a little too far – and spends the day running around the house in her costume tripping Cameron and jumping out of the shower and punching him. Mitchell thinks she is hilarious though.

Phil pulls out the “big guns” and has his dad stop by with his friends and his huge RV – which he parks right in front of the neighbor’s house. Phil tells their neighbors that they “see their boat and raise them a convoy of retirees.” Meanwhile Luke is flirting with the neighbor’s daughter, but she is not interested – she tells him to “run home to his mommy” and calls him a “little bitch.”

Cameron informs Mitchell that it is his fault Lily is running around the house attacking him because he laughed so hard when she hit him with a broom. And, to top it off Mitchell “turned their daughter against something that he loves.”

Phil’s plan backfires when he goes outside later that night and finds his dad and all of his friends on the neighbor’s boat smoking weed with them.

At jay’s house Gloria and Manny have a breakthrough and realize that Jay is just trying to potty train Joe because he feels guilty that he missed all the big milestones in Claire and Mitch’s lives. When they are done talking – Joe shocks the all and pees in the potty. Jay is so excited, he picks him up before he finishes and gets pee all over him.
Mitchell talks to Lily and learns that she is being a bad clown because she hates clowns and doesn’t want to do it anymore. She confesses that she just wanted to be a clown to make Cameron happy, but she just can’t do it anymore. Lily and Mitchell break the news to Cameron and she explains that she just can’t be “as good as him at clowning” so she will try again when she is older.

The next morning Phil heads outside and his neighbor reveals that while he was partying with Ronnie he had a break through and he is going to move the boat and be a better neighbor. He makes up with Phil and then the police arrive because Claire kept calling them. Their neighbors yell at the Dunphy’s that they aren’t friends anymore and they “narced on them.”