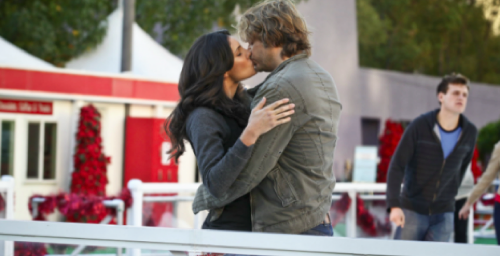 Tonight on CBS NCIS: Los Angeles continues with an all new Monday October 5, season 7 episode 3 called, “Driving Miss Diaz,” and we have your weekly recap below. On tonight’s episode, A 20-year-old Peruvian massacre is investigated after a famous fashion model, believed to be one of the survivors, becomes a potential target.

On the last episode, DEA agent Talia Del Campo seeks help from NCIS after her partner was murdered. Meanwhile, Kensi grew suspicious that Deeks was hiding something, but he surprised her by introducing her to his mother. Did you watch the last episode? If you missed it we have a full and detailed recap right here for you.

On tonight’s episode as per the CBS synopsis, “a 20-year-old Peruvian massacre is investigated after a famous fashion model, believed to be one of the survivors, becomes a potential target. Kensi goes undercover as the model’s assistant, while Deeks poses as her chauffeur.”

It’s that time again at the office. The agents have to do their bi-monthly security assessment and what that means is that there’s going to be a lot of paperwork.

Though the guys never got pass complaining about the assessment before they were immediately pulled into active duty. There was an attempted kidnapping case in St. Louis and it seems the victim of that attempt is not the only one that should be afraid for her life. Thus tonight its Sam and Callen that’s on reconnaissance. Meanwhile Kensi and Deeks had to go in undercover.

The woman that was attacked was one of four possible women that may have survived a massacre over twenty years ago. Apparently, at the time, there was a General Alfredo Silva in charge of the army and it was under his order that a group of dissidents were murdered. But there had always been a story that child survived. The Girl that Lived.

So the Global Criminal Tribunal wants to find this girl. If she can recall what happened at the massacre then her testimony might be just the thing to stop Silva from getting elected president.

It seems the former General had come up in the world and he’s currently very popular with the people so he doesn’t want anyone drudging up the past. Particular the Tribunal who have been after him for the past few years now. Hoping they could pin at least one war crime on him. But the person that brought this girl to the Tribunal’s attention was Alexander Elmsie.

Elmsie had already been let go from the agency once before so it was imperative that he got this case right. And because three of the four girls had been eliminated thanks to a DNA Test that only left one other possibility. A Catalina Diaz who was based in LA.

Catalina was a model so Deeks pretended to be her new driver and Kensi chose to act her newest assistant. And it was their job to lower her defenses. Talk to her, befriend her, and then slowly introduce her to the federal agents that were willing to protect her from Silva.

But the plan went awry. Catalina at first claimed not to have been at any massacre much less no anyone that has been. So Hetty pulled out the big guns. She threatened to destroy Catalina’s career if she didn’t assist in the investigation into Silva.

And although she agreed, Catalina took the first opportunity to evade her NCIS detail and run off with her brother who she had also earlier claimed was her boyfriend.

So there was a lot of mystery surrounding Catalina. And besides protecting her there didn’t seem like she had that much value in the case.

Earlier, Granger had admitted to swiping Catalina’s DNA when she wasn’t looking and it didn’t match any of them victims from the massacre. So Elmsie for one began to doubt they were even barking up the right tree. And that maybe the whole “The Girl that Lived” was a myth. Most likely based off a Harry Potter movie.

Thus, in other words, Elmsie wanted to give up.

Elmsie has changed since the team last saw him. He’s a broken man and this investigation hasn’t done him any good. There was a leak at the Tribunal so that’s how Silva found out about all the girls and when Elmsie tried to help Sam and Callen find out who had spilled to Silva – someone then attempted to set him up as the fall guy.

Thankfully the guys stopped the people that were trying to kill him but Elmsie couldn’t return to Tribunal after that. Nor did he have a home to return to so that he might just have a break from the case. After his last blunder on the job, his family ended up leaving him and now he barely gets the chance to visit his daughter seeing as no judge likes an alcoholic. Even if he’s in recovery.

So it’s understandable why Elmsie would feel disheartened but Sam and Callen came across a woman that had tried to burn down Catalina’s apartment. The woman claimed to not be an affiliate of Silva’s yet no one believed her until Elmsie decided to look into the brother that Catalina tried to hide.

The brother fits the same age that Silva’s son would have been if he had survived a house fire when he was a couple of months old. So Elmsie took a second look at the article and Sam and Callen realized the baby’s mother was the one that just tried to burn down an apartment.

Her name was Blanca. And Silva allowed her and her child to survive the massacre because he thought she was pretty. However not long after she had given birth to his son – Silva started to pay attention to her daughter. So Blanca faked their deaths knowing that Silva would be too proud to admit she ran away and she made sure to put her children up for adoption in America.

She didn’t want Silva to find them and for a long time that worked until an investigation was opened. So Blanca agreed to testify as long as her children were safe. As for her children, though, Sam and Callen had to extract them from quite a dangerous situation involving Silva’s men but ultimately they agreed to go along with the plan.

They’ll testify to the Tribunal so long as they could finally stop running from Silva.