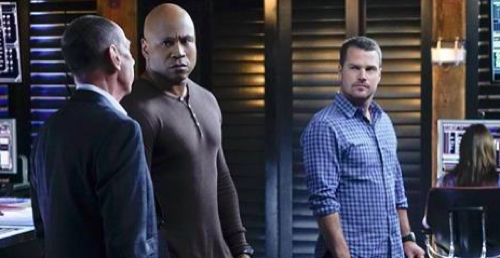 Tonight on CBS NCIS: Los Angeles continues with an all new Monday November 2, season 7 episode 6 called, “Unspoken,” and we have your weekly recap below. On tonight’s episode, the team search for Sam’s  (LL Cool J) former partner.

On the last episode, NCIS special agent DiNozzo partnered with the NCIS: Los Angeles team to search the city after his prisoner escaped custody on a flight from Singapore to L.A. Did you watch the last episode? If you missed it we have a full and detailed recap right here for you.

On tonight’s episode as per the CBS synopsis, “the team search for Sam’s former partner, Ruiz, who disappears while buying a bomb during an undercover operation.”

Sam found out on tonight’s episode of “NCIS: Los Angeles” that his former Mark Ruiz had gotten himself into some trouble. Apparently Mark was working as an undercover asset for ATF and, during a cash transaction with arms dealers, something had gone wrong. Either they were onto him or the breakdown in communication was part of the plan all along but a bomb had ultimately went off and the last images of Mark showed him making off with all the money he was supposed to have handed over to his handlers. The same handlers that he never contacted afterwards.

So that’s when ATF decided to pass Mark’s off onto someone else and unfortunately he became NCIS’s problem. And, despite the evidence, Sam didn’t think Mark was dirty.

He had worked with the other man for over a year before Callen came along. And in that time, he had grown close to both Mark and Mark’s family. Some would say too close seeing as Mark has been holding a grudge against Sam for all these years. Therefore, when they met again, it was explosive.

Sam and Callen had been sent in to apprehend Mark and Mark didn’t come in easy. He had put up a fight. And had even knocked Sam out in the process. But Mark was unable to escape both men and so he was taken into custody. Where he had to come up with plausible reasons for why it looked like he blew up a building with people still in it and then robbed the corpses.

See, the deal that Mark was allegedly working on involved military grade explosives. A couple of college kids had recreated the weapons seeing as the Department of Defense have been cracking down on such things. Only the college kids went on to sell those explosives to someone who wanted to resell them. So Mark was brought in because his cover as an explosive expert allowed him to oversee the deal and gather enough evidence against the men.

But the buyers and sellers had a problem. The seller didn’t actual want to sell and he had been planning on robbing the buyers while he still kept the weapons. So it was this other man that had set off the bomb and, at the time, Mark just didn’t have the proof to vindicate himself.

And that’s why he went dark.

Yet, Mark hadn’t left NCIS with any choices. They had to believe him in order to receive his help in carrying out the original deal. And it was only when they met the seller that they realized Mark had been telling the truth the entire time. He was clean and he didn’t kill anyone.

Meanwhile their seller was proven to be a terrorist. He had been going about business under a false name yet he was sending money and weapons back to the Philippines. Apparently there’s an extremist cell residing there as well and so the seller was secretly funding their agenda. And he told no one about his plans. Not even his own men in the states who thought they were going to be sell the explosives for two million dollars.

However Sam had to inform them about the type of man they were working for and convinced them to turn against him.

Which they did. They shot their boss right then and there. Then followed that up by offering to carry out the trade as a regular transaction with Mark and Sam. So all the guys had to do was pick up the money that Mark had stashed and then bust Diego (the new boss) and his brother for arms dealing.

But the guys got to talking when they thought they were alone and so Mark addressed the problem that’s been bothering him since he’s seen Sam again. It seems he wanted to know if Sam had slept with his wife while he was in rehab and at first Sam was stunned. He didn’t answer the charge right away. But when he did, he called Mark out for being that paranoid.

Sam had never slept with his wife and didn’t know where that accusation came from. Though their conversation had alerted the men that were following them into figuring out something wasn’t right about them. So Callen and Granger had to step in to stop Sam and Mark from getting killed.

Although that wasn’t their last close call. Later Sam and Mark finally finished the deal and so they had a swat team move in to wrangle up all the suspects. Only one suspect got away hence the men pursued him. And, well, Sam was almost caught in the crossfires when Mark took a bullet that was meant for his former partner.

Luckily Mark was fine in the end and that heroic maneuver of his had also endear Sam into forgiving him for earlier. But Mark had long way to go to repairing his relationship with his wife and son. He had been pushing them away out of misplaced jealousy and that wasn’t fair to them.

So hopefully they can forgive him.