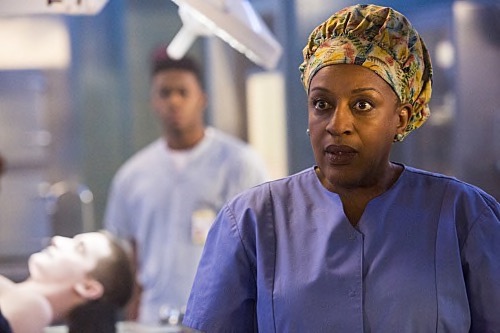 Tonight on CBS NCIS: New Orleans returns with an all new Tuesday April 7, season 1 episode 19 called, “The Insider,” and we have your weekly recap below. On tonight’s episode, Wade, Sebastian [Rob Kerkovich] and Danny are taken hostage in the morgue when an armed man bursts in and demands the remains of a petty officer, who is thought to have died from natural causes.

On the last episode, a sailor was killed in a strip club and the murder weapon was linked to two other unsolved homicides. In addition, the investigation revealed that the names of the three victims appeared on a mural in a dilapidated part of town. Meanwhile, Brody’s ex-fiancé payed her a surprise visit. Did you watch the last episode? If you missed it, we have a full and detailed recap right here for you.

On tonight’s episode as per the CBS synopsis, “while conducting an autopsy on a Petty Officer who is believed to have died from natural causes, an armed man enters the morgue and holds Wade, Sebastian and Danny hostage.”

Tonight’s episode of NCIS New Orleans begins with a man trying to get through airport security – the guard takes him aside for random search – he flashes the guard a military badge saying that his name is Felix Armstrong. The airport security guard tells him to go on ahead, and then Felix drops to the ground and appears to pass out. The guards rush to Felix’s side and he is not breathing and appears to have dropped dead.

Dr. Wade arrives at the airport with the NCIS team to investigate the body. She finds medicine in Felix’s pockets that is prescribed for blood clots. Felix’s fingernails are blue, which means that he could have died because of lack of oxygen – or a possible drug overdose. Wade says that she won’t know for sure until she gets Felix on the table. While Dr. Wade is in the coroner’s office preparing for the autopsy with Sebastian and Danny. A man walks in an says that he needs Felix’s body and he has a letter from the family giving him permission to take him. Dr. Wade says they can’t release the body until after the autopsy is complete – and he pulls a gun on her.

Dwayne and LaSalle are trying to figure out why a Chicago Navy officer was even in New Orleans, he didn’t even tell his family that he was leaving town and he paid for a charter flight instead of flying as an officer. Merr says that Max’s friend Phillip Culver was waiting for him at the airport – when he dropped dead Culver left to notify his family and never returned to the scene. Meanwhile, they have no idea that Loretta and her assistants have been taken hostage in the morgue. The gunman orders them to put their phones on the table and bag up Felix’s body.

Dwayne contacts Felix’s commanding officer – he went missing yesterday and wasn’t authorized to even leave base. They are just as baffled as Dwayne is about why Felix was in New Orleans. Dwayne learns that Felix was working on a terrorist group based in Cuba. He tells his commanding officer to get in charge with him if he gets any more info on Felix. Merr is trying to track down Phillip Culver, she pulled photos of him from the airport security – and he is the same guy that is holding Loretta hostage in the morgue.

Dwayne calls Loretta and realizes that something is not right, he grabs his team and tells them they have to go the morgue ASAP. Loretta and the gun man are trying to get Felix’s body out of the morgue, one of the security guards stops them and he shoots him in the chest and runs back in to the office. Danny tries to tackle the man with the gun and a shot is fired – Danny is shot in the chest. Loretta rushes to his side to put pressure on his wound. Dwayne and his tea arrive at the morgue with back-up, they find the wounded security guard and rush him in to the ambulance.

Dwayne calls the phone in the morgue to make contact with the gunman, he learns that Danny has been shot – but Loretta and Sebastian are okay. Dwayne asks him to send Danny out so that he can get medical attention – he refuses and says that if anyone else calls or comes after him there will be a lot more body bags. Dwayne hangs up and Merr barges in – she says that she got an ID on the gunman, and it is the same man from the airport. They are still running his photo through the database and trying to ID him so they can figure out what he wants.

In the morgue Danny is taking a turn for the worse – his lungs are filling for blood. Loreatta and Sebastian are trying to save him, but Loretta’s wrist is still injured so Sebastian has to step up and cut open Danny’s chest and drain the blood so that he doesn’t die. Danny tries to give Loretta a message for his brother CJ, but Loretta reassures him he is going to be just fine.

They get a phone number off from the mystery gunman’s phone, they were able to catch him dialing it in surveillance footage. They trace the number to a Dr. Timothy. Merr and LaSalle head to Timothy’s house to see if he can ID the gun man, after they knock on the door – the crazy doctor fires dozens of gunshots at them. Merr and LaSalle manage to get inside the house without getting shot and they arrest the crazy doctor. Once he is cuffed LaSalle does a sweep of the house and he finds a bloody table in the basement and a woman’s dead body stashed away in a chest freezer.

Dr. Timothy barely speaks English – he insists that he didn’t murder the woman in the freezer, she was already dead and she was a drug mule. Marcus Martel, the gunman in the morgue, brought the woman’s dead body to Timothy. All he did was cut the body open to get the drugs out. Now that they know Marcus Martel’s name, they find an address for him in the database. Merr and LaSalle head to Martel’s apartment – they find a picture of Martel posing with Armstrong and a third mystery guy. Meanwhile in the morgue, Marcus orders Sebastian to cut open Felix and get him something out of his stomach.

LaSalle and Merr ID the other guy in the picture, his name was Nathan – he was a Navy Seal officer and killed 10 months ago. His death was classified, and the Navy refused to release any information on what happened to him. They found emails from Marcus to the Navy threatening to expose their shady investigation if they didn’t tell him what happened to his brother. Meanwhile inside the morgue Sebastian fishes a flashdrive out of Felix’s stomach.

Outside of the morgue Felix’s commanding officer Captain Dawson arrives with convoy of FBI agents – he says that HE reveals that two days ago Felix downloaded national security information on to a hard drive and Felix swallowed it and smuggled it through the airport. Dawson prepares to storm the morgue – Dwayne argues that he has people in there but Dawson doesn’t want to hear it.

Dwayne orders his tech guy to get the Navy’s restricted file on what happened to his brother Nathan – then he marches in to the morgue. Marcus tells Dwayne to get out before he shoots another hostage. Dwayne tells Marcus that he has the file on Nathan and knows how he died – Marcus demands to see it, but Dwayne says he can’t see it until he lets Danny leave and get medical attention, he has lost a lot of blood.

Marcus lets Sebastian and Danny leave and they get rushed in to the ambulance – Dwayne gies him the file and explains that his brother Nathan was killed by an Alamajid terrorist front. They were working with the US Navy to take down a Syrian official – and they turned on Nathan and killed him instead. Marcus is devastated, the FBI storms the morgue and he is arrested and taken in to custody without incident. After Marcus is carted off, Dawson reprimands Dwayne for letting him see one of the classified files. Dwayne heads to the hospital to check in on Danny, Loretta is sitting at his bedside with him. She says that Danny is stable – the doctor will be back to check on him in an hour, she breaks down and Dwayne comforts her.