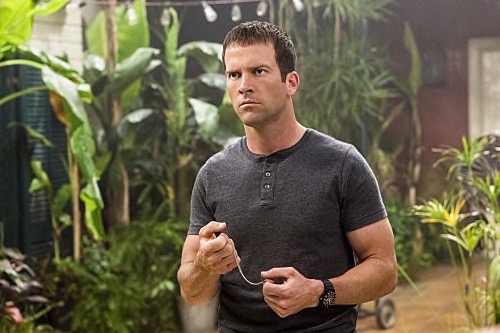 Tonight on CBS NCIS: New Orleans returns with an all new Tuesday May 5, season 1 episode 22 called, “How Much Pain Can You Take,” and we have your weekly recap below. On tonight’s episode, Baitfish murders someone close to the NCIS team, in order to send a message to Pride, which prompts a citywide manhunt for the elusive criminal.

On the last episode, with no memory of the night before, Lasalle’s brother, Cade, turned to NCIS for help when he found his girlfriend’s body in the trunk of his car. Despite a mountain of evidence that implicated Cade, and the case being under Captain Jim Messier and Jefferson Parish jurisdiction, Lasalle was determined to prove his brother’s innocence. Dylan Walsh guest stars as Captain Jim Messier of the Jefferson Parish Police Department. Did you watch the last episode? If you missed it, we have a full and detailed recap right here for you.

On tonight’s episode as per the CBS synopsis, “to send a message to Pride, Baitfish murders someone close to the NCIS team, prompting a citywide manhunt for the elusive criminal. Dylan Walsh guest stars as Captain Jim Messier of the Jefferson Parish Police Department.”

Tonight’s episode of NCIS New Orleans kicks off at Chris’s house – his girlfriend Savannah has been shot and killed. Chris seems to be in shock, he explains to Pride that he went out to get wine and when he came back around 9:00 PM he found her dead on the kitchen floor – she has been shot in the chest. Loretta and Merri get to work on Savannah’s body. Merri takes Pride aside and tells him that they found a fingerprint on her body, it’s Paul Jinx, aka Bait Fish.

Loretta explains to Pride that the body has been moved, Jinx dragged her over in front of the sliding glass door before he left. Pride is stumped, he doesn’t understand why he would drag her body in front of the window. Suddenly he screams at everyone to get down – and someone opens fire and begins shooting at the cops through the window. Two cops are killed by the shooter and four more are whisked away in ambulances. Chris runs outside to look for the shoots, he finds the AK-47 but the shooter is long gone.

Pride slips away to meet his contact Sonja – he tells her that he knows who Bait Fish’s target was, it was his men. He reveals that Jinx killed Savannah, and two cops, and injured four more. Pride wants to pull Sonja out of her cover, but she refuses. He lets her get back to work and tells her she has to check in every two hours or else she is done. Afterwards, Jinx calls Pride and taunts him – Pride shouts in to his phone that he will never stop searching for him and promises he will find him “and end him.”

The next day Sebastian begins running tests on the bullets that you were used to shoot the police. Meanwhile, Sonja gets a text from Bait Fish – he orders her to get in her car and he hops in the backseat. He takes out a rifle and asks her if she has ever hijacked a truck. At the lab Sebastian goes over the bullets with Merri and Chris – he says that they aren’t getting a hit in the database because the bullets are incredibly rare and they shatter on impact with human flesh. The bullets were manufactured in South America in 2003, but they were deemed illegal and the Navy was supposed to have seized and destroyed. But, before they could get destroyed someone killed the Naval guards on the base and the bullets were stolen.

Pride gets a 911 call – a truck was hijacked on the highway and the driver was shot with the stolen bullets. They realize it was Bait Fish, and they are baffled as to why he would hijack a furniture truck. Pride is worried about Sonja, they find blood in the road that doesn’t belong to the truck driver – and Sonja’s phone is laying in the grass. Merri takes the phone back to the lab to see if Sebastian can get any information off it – he says that someone took the sim card out of it before they tossed it in the grass, so there is nothing to trace.

Chris begins looking through the furniture truck and realizes that the furniture is just a front – and it has stolen artifacts hidden inside the furniture from the Iraq War. The artifacts are called the “Teardrops of Asyria” and they have been dealt in the black market for years. Merri runs the name of the truck driver, they learn that Devin Howell was working for Jinx’s ex-partner Sasha. Jinx and Sasha split ways – so he stole her truckload of artifacts. The news is on in the station and Sasha holds a press conference, she offers a $100,000 reward for anyone who calls a hotline that she has set up to find Paul Jinx. Pride is furious – he doesn’t want her to get to Jinx before they do.

In a shocking twist Paul Jinx arrives at headquarters – Pride, Chris, and Merri run outside in the street with their guns drawn. Paul drops on his knees and announces that he isn’t there to fight, he came to surrender. Pride drags Jinx in to the interrogation room, he demands to know where Sonja is – Jinx says she is dying and gives them the address where he left her. Merri and Chris rush out to find Sonja. In the interrogation room, Jinx brags to Pride that he already made a deal with the US Attorney General.

Chris and Merri find Sonja in the knick of time – they call an ambulance for her. Back at the station Pride meets with the attorney general, she reveals that they already cut a deal with Jinx and even though he killed a dozen people, he is only going to do five years of jail time – all because he is rolling over on his old partner Sasha and giving them intel on her entire operation. The attorney general tells Pride the deal is being signed tomorrow morning, they have 12 hours to build a case against Sasha, if he can’t then they are giving Jinx the deal.

Pride’s team gets a lead on Paul Jinx’s stash – he has thousands of hidden illegal bullets and boxes of counterfeit money hidden for when he gets out of jail. They know that Sasha is the one that smuggled the bullets and counterfeit money from overseas – and she is used Naval boats to do it so that she didn’t get caught. Pride pays Sasha a visit and tries to get her to surrender so that Jinx doesn’t get the deal he was promised – Sasha refuses to come in with Pride and insists that he is making a mistake.

The attorney general arrives to pick up Jinx since they weren’t able to deliver Sasha, she leaves with her prisoner in a van. Chris and Merri insist on following her, because they don’t want the attorney general to sign Jinx’s deal yet. While they are following the van a huge truck cuts them off and begins filling the attorney general’s van with bullets. Jinx manages to escape while the police are shooting the gun men, Chris chases after him in to an abandoned warehouse. Merri and Pride run in to the warehouse after Chris and Jinx.

Inside the warehouse Jinx surrenders to Chris and says that he was just trying to get away from the men that were trying to shoot him. Chris kicks Jinx his weapon and orders him to pick it up, Chris says that he is going to shoot him but he is giving him a chance to defend himself – which is more than he gave Savannah. Pride and Merri arrive just in time, Pride orders Chris to drop his gun, and manages to talk him down. Jinx rambles that he is going to sign his deal, and warns Pride that there is a big storm coming to New Orleans and it is bigger than all of them. Then, a shooter sneaks in to the warehouse and shoots and kills Jinx and runs out before Pride can catch him.

Pride visits Sasha in jail, he demands to know what storm Jinx was talking about – she scoffs that something bad is always happening in New Orleans, how should she know?