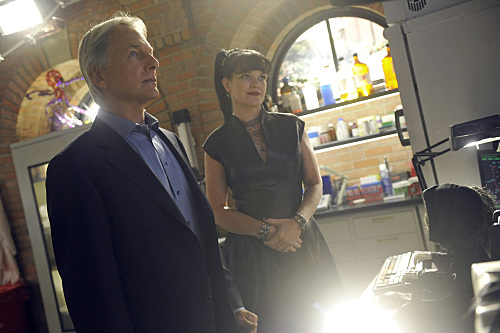 Tonight on CBS NCIS returns with an all new Tuesday October 27, season 13 episode 6 called, “Viral” and we have your weekly recap below. On tonight’s episode, a petty officer is murdered and the NCIS team investigates to determine if the crime is the work of a local serial killer or a copycat.

On the last episode, while visiting a pharmaceutical lab on a murder case, Abby was trapped with no communication to the outside world after armed men take over the building and hold everyone hostage. Tony Gonzalez, former NFL player and studio analyst for The NFL Todayon the Network and contributor for Thursday Night Football, guest starred as NCIS Special Agent Tony Francis. Did you watch the last episode? If you missed it, we have a full and detailed recap right here for you.

On tonight’s episode as per the CBS synopsis, “a petty officer is murdered and the NCIS team investigates to determine if the crime is the work of a local serial killer or a copycat. Meanwhile, McGee and Delilah must learn to compromise before moving in together.”

Tonight’s episode looks like it is going to be great and you won’t want to miss it, so be sure to tune in for our live coverage of CBS’s NCIS at 8:00 PM EST! While you wait for our recap hit the comments and let us know how excited you are for the season 13 episode 6.

Petty Officer Second Class Adam Meyers was just enjoying a day in the park when someone decided to shoot him with children running close by.

It was Halloween and the park that Meyers was in had been full. It seems they were having these fun activities set up for all the neighborhood kids. You know where they could gorge on as much candy as they want and be as equally safe under the watchful eye of their parents. Yet despite the number of people at the park with Meyers, when a gun went off, everyone had been focusing on protecting the children and thus didn’t lift up their heads until they were sure they were safe. And unfortunately in Meyer’s case that meant no one saw his killer.

Though if killer was as good as he’s been boasting then he probably knew how to hide from any and all witnesses. See, a calling card was left behind at the scene of the crime and it identified the killer as the known serial killer The Tri-State Sniper. The Sniper had already killed six people up until then and so when the agents find the calling card with the number seven they just assumed they had the same guy.

And to be fair to them, everything fit. Again there was that calling card that seemingly looked like all the others. Plus Meyers had been killed in the same fashion as the previous victims. He received one shot to the chest and that was it.

So there was no reason for the NCIS to doubt Meyers had been killed by the sniper. However a source on the sniper’s case eventually reached out to them and he had some sorry news. He said he couldn’t tell them before until he had the guy arraigned, but his people picked up the sniper on the same he was supposed to have killed Meyers. And there was simply no way the Tri-State Sniper could have killed Meyers and be almost a state away in the next fifteen minutes.

Therefore the NCIS had to start looking at copycats and by doing that they also found a motive that is for why someone would target Meyers to begin with. Meyers, it appears, had an unsavory past. In fact he had an altercation with a fellow officer while the last time the USS Camden was at sea.

An agent from the Sexual Violence Unit informed Gibbs that his victim had been put a hidden camera in the women’s changing area and he had uploaded images of them online. One of the women, an Ashley Ryan, was never able to overcome what she had suffered and she eventually committed suicide because of what Meyers did. So, in other words, Meyers wasn’t a likable guy and the only one that regretted his death was his younger sister Farrah.

But his victims were still raw from what he did. Another officers tried one injunction after another to get her pictures removed and nothing worked. So she wasn’t upset when NCIS informed her about Meyers. If anything she felt he had it coming.

What Meyers did onboard the ship was wrong however he never got a chance to pay for it. He had been given a slap on the wrist by the Navy at the time and continued with his life as if nothing was wrong. That is until he was punched.

Ducky found evidence during Meyer’s autopsy of someone having punched a few teeth lose in the last couple of days. So DiNozzo went look for this puncher and he found a victim of Meyer’s. She said she didn’t tell anyone including NCIS when they first asked her about Meyers because she knew it looked bad. And she didn’t want Meyers to further ruin her life by causing her to get a dishonorable discharge.

Though she said he was very much alive when she left him. She had only hit him to begin with because he had showed at Ashley’s funeral promising to make everything better. And all wanted to do at the time was let him know that nothing he did could fix the damage he caused.

Only Meyers did cause anything. He did not have the tech savvy to set up a hidden camera much less upload the images. So when DiNozzo and McGee that he was meeting on the day he died – everything became clear. And what the team knew for sure was that Meyers hadn’t been the voyeur on the USS Camden. He just took the blame in exchange for cash that he apparently needed to hire a lawyer for his sister.

See Rossmore later told NCIS that Farrah had gotten arrested for a DUI when they were on deployment. Now there was a way for her to get a lenient sentence but at the time Meyers hadn’t had the money for a proper lawyer. Yet in the following days after that, Meyers ended up confessing to the whole camera scenario. And someone managed to miraculously wire him all the money he needed for Farrah.

Abby eventually found the money transfer that Meyers used to pay for a lawyer. And that money could not have come from thin air. So Bishop did a search into who else would have taken the pictures and she found former Officer Woodruff.

Earlier Bishop had been worried about her husband being possible caught in a terrorist attack but he turned out to be fine. NSA had removed him from Dubai before the bomb could go off at his hotel and so he was safe. But while Bishop appeared to be fine in front of everyone else – she did let Gibbs see how much she had been falling apart on the inside.

And when she returned to the field, she gave her team what they needed to know on Woodruff. It seems he had a problem with taking orders from women so that’s why he did what he did. But, regardless of what he thought about his former captain, the other man refused to help him and instead turn him over to NCIS along with the recording of their conversation.