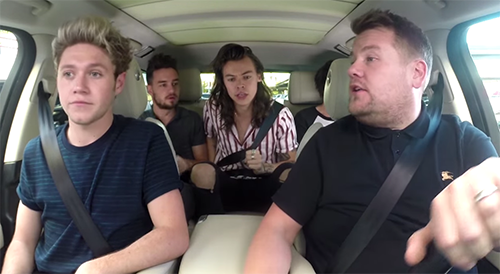 Niall Horan is demanding that Selena Gomez stop sleeping around? Is Niall desperate to settle down and start a family with SelGo? How did this all get started? Blame it all on “Karaoke Carpool!” Niall played an innocent – and hilarious – game of “Sleep With, Marry, Cruise” – similar to “Sleep, Marry, Kill” on The Late Late Show with James Corden December 15. Corden offered Horan’s three names – Tina Fey, Demi Lovato and Selena.

The rules of “Sleep With, Marry, Cruise” are simple, but a little different from the original game. Niall could choose one of the ladies to sleep with, obviously. Tina Fey was Horan’s choice to sleep with.

The cruise choice – pick one person to take on a one year cruise. You can’t sleep with that person, just go on the cruise. Niall Horan chose Demi Lovato as his cruise partner. Marry is self-explanatory – and there was only one name left – Selena Gomez!

Even if Niall is serious, SelGo appears to be juggling a lot of guys right now. The list begins with on-again-off-again boyfriend Justin Bieber. Not long ago, the Biebs was caught serenading SelGo in a piano bar in Los Angeles.

Add in Zedd. SelGo was caught kissing the Russian born DJ backstage at the Z-100 Jingle Ball. Then there’s Nick Jonas and Gigi Hadid’s ex-boyfriend Samuel Krost – that’s a lot of guys. And wait, you can’t forget the gossip about Selena Gomez and bisexual BFF model Cara Delevigne indulging in a bit of a fling.

Niall probably taped the segment for The Late Late Show with James Corden at least a couple of weeks ago – if not more – before Horan took Selena to the Santa Monica Pier for a date/make-out session. That hot hook-up took place the weekend before the KIIS-FM December 4 Jingle Ball.

Is Selena Gomez exploring her options and sleeping around? Is SelGo really dating a bunch of guys – and maybe Cara Delevigne? If Selena is dating up a storm, could Niall Horan’s answer to “Sleep With, Marry, Cruise” make SelGo take a second look at Niall? Maybe Horan is boyfriend material after all.