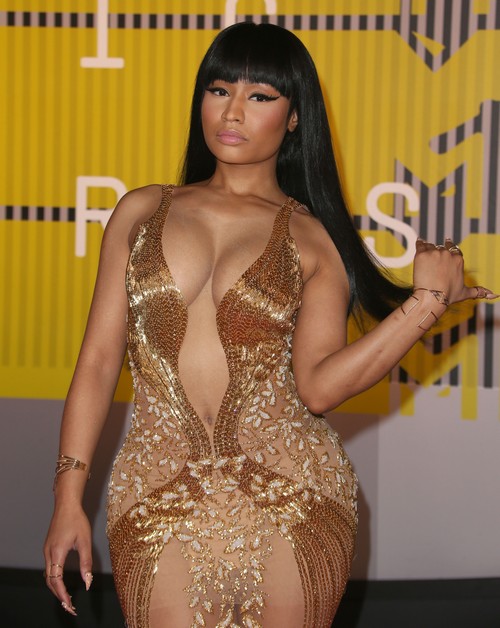 There were a ton of shocking moments at the 2015 MTV Video Music Awards, but Nicki Minaj and Miley Cyrus’ bitch fight was very real and very unplanned. After Nicki decided to confront Miley on stage, staff scrambled to keep singers apart.

The live broadcast of the MTV Video Music Awards means ample opportunity for celebrity gossip, and there was plenty of drama to go around. Miley Cyrus tried to steal the show by constantly looking like one of those cheap knockoff dolls you get from gumball machines, but Nicki Minaj wasn’t having it.

The bitch fight actually started about a month ago and involved Taylor Swift and Twitter. (Because you can’t have one without the other, apparently.) Nicki Minaj tweeted her frustrations with MTV for snubbing her video for ‘Anaconda’ in the Video of the Year category, saying, “If I was a different “kind” of artist, Anaconda would be nominated for best choreo and vid of the year as well.” Nick makes a very good point regrading race and pop culture.

Of course, the walking box full of kitten kisses Taylor Swift jumped in to say, “I’ve done nothing but love & support you. It’s unlike you to pit women against each other. Maybe one of the men took your slot..” Clearly Taylor missed the point, but where Nicki could have easily taken Swift down.

Instead, the world did a facepalm and Nicki told Taylor to go back to her Lisa Frank coloring books replying, “Huh? U must not be reading my tweets. Didn’t say a word about u. I love u just as much. But u should speak on this.” Then, Taylor being delightfully idiotic, shot back, “If I win, please come up with me!! You’re invited to any stage I’m ever on.”

Of course, every Stunt Queen whoever stunted wanted in on this drama and Miley Cyrus opened her mouth, unleashing her thoughts during an interview with the New York Times. The ‘Wrecking Ball’ singer told the NYT, “If you do things with an open heart and you come at things with love, you would be heard and I would respect your statement. But I don’t respect your statement because of the anger that came with it. And it’s not anger like, ‘Guys, I’m frustrated about some things that are a bigger issue.’ You made it about you. Not to sound like a bitch, but that’s like, ‘Eh, I didn’t get my V.M.A.’” If that wasn’t enough, Miley continued to flap her white film-covered tongue attacking Nicki and saying, “What I read sounded very Nicki Minaj, which, if you know Nicki Minaj is not too kind. It’s not very polite. I think there’s a way you speak to people with openness and love.”

Nicki Minaj is very aware of the concept that just because you say, “not to sound like a bitch, but…” doesn’t mean you can say whatever you want and not be a bitch. So, instead of clawing her eyes out backstage, Nicki decided to call Miley Cyrus out while accepting the award for Best Hip Hop Video. Minaj ended her “thank you” speech and turned to Miley and said, “And now…back to this bitch that had a lot to say about me in the press. Miley, what’s good?”

Miley, dressed up as what I can only describe as Angelica’s abused doll, Cynthia, from ‘Rugrats,’ scoffed and touted back, “Hey, we are all in this industry and we all do interviews and say s–t. Nicki, congratuf–kinglations.” Nicki’s mic was turned off at that point, but the camera pan back to Minaj mouthing, “Don’t play with me, bitch!”

Some thought the feud was staged, but the Miley Cyrus and Nicki Minaj bitch fight was not planned. In fact, according to Us, staffers scrambled to keep Miley and Nicki apart the rest of the night. They attempted to keep the two feuding singers from crossing paths because “they were legitimately worried about a confrontation happening.”

This Nicki Minaj and Miley Cyrus feud is not over. I’m sure a follow up Twitter fight will be happening in 3…2…1…