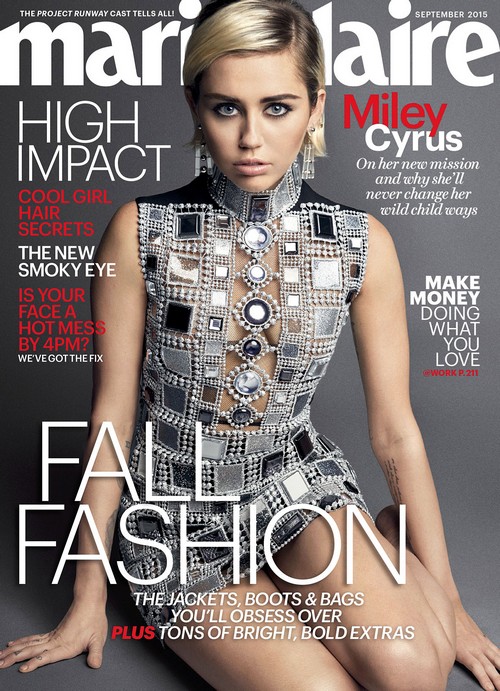 Miley Cyrus just declared war on Taylor Swift! Miley covered this month’s issue of Marie Claire magazine, and sat down to discuss several controversial topics in an exclusive interview. Despite the fact that Miley announced she “feels like a teenage boy,” everyone is buzzing about what she had to say about fellow pop singer Taylor Swift. Miley dished to Marie Claire that she thought Swift was a “bad role model.”

While discussing Taylor Swift’s new music video “Bad Blood,” which was an obvious jab at her nemesis Katy Perry – Miley made it very clear that she did not condone the violence in the video. Here’s what she had to say, “I don’t get the violence revenge thing. That’s supposed to be a good example? And I’m a bad role model because I’m running around with my t-tties out? I’m not sure how t-tties are worse than guns.”

We never thought we would say this…but Miley Cyrus has a point. Granted, she isn’t the greatest role model. But, she also isn’t releasing music videos that 12 year old girls are gobbling up about getting revenge on your enemies with guns. Taylor Swift seems to have gotten a free pass with her “Bad Blood” video – and nobody is questioning how violent it is, and how inappropriate it is for her general audience – which is a bunch of middle school girls.

Obviously, you don’t want your children running around and acting like Miley Cyrus. But, you don’t  really want them running around and declaring war on other girls and wielding weapons either, do you? Over the course of the last few months Taylor Swift’s true colors have really started to shine through, and despite her fake sweetheart persona – Taylor is basically Regina George 2.0.

Do you think that Miley has a point? Does this mean that she is Team Katy in the Swift and Perry feud? Is Taylor Swift really that great a role model? Let us know what you think in the comments below!

Taylor Swift spotted out for lunch with friends in Studio City, California on August 10, 2015. Taylor was ripped by Miley Cyrus during a recent interview with Miley saying, ‘I don’t get the violence revenge thing. That’s supposed to be a good example?, And I’m a bad role model because I’m running around with my t****** out? I’m not sure how t****** are worse than guns.’ FameFlynet